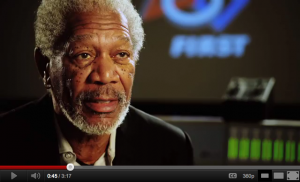 I admit.  The title of this post is a little sensationalized.  The video is actually about US FIRST, a nonprofit group that organizes tech-based “sports” for kids from elementary school to high school.  At the low-end they’re using Legos.  At the high-end, they’re using power tools and soldering irons.  They have people like Dean Kamen (inventor of the portable dialysis machine, the highly mobile wheelchair and, alas, the Segway), Morgan Freeman, will.i.am (The Black Eyed Peas) behind them.  Kids look up to sports heroes, actors, musicians, but rarely look up to the more brainy types — be it science, math, philosophy, or literature.  FIRST is trying to counter this by turning robotics into a sort of varsity sport that everyone can get behind.

I recently saw a lunchtime talk by the Pacific NW Director, Deb Mumm-Hill and two of the local robotics teams.  She is the director of the “local” US First group, Oregon FIRST, which I think is a misnomer because she mentioned it also covered Washing and Alaska.

Kid interest in science and math have taken a sort of dive-bomb in recent decades.  There are a few highly visible bubbles, like computer programming and internet tech, but as a whole, it’s been on the decline since Kennedy.  It took about 8 years to get from moon-speech to moon-landing.  Something I did not know was that the average age of a NASA scientist at the time of the landing was 24.  I always pictured them as old fogies, but they were high school teenagers when Kennedy gave his speech.  Learning science and math was not just fun, but patriotic and cool back then.

FIRST is all about getting kids interested in not just robotics, not just technology, but preparing them for whatever technologies haven’t even been invented yet.  It’s aimed not just at the math/science geek, but at a whole range of skills and interests.  Back in my day, the kids taking woodshop or metal shop might make cool birdhouses or sharp ninja throwing stars, but their college and career prospects were severely limited.  FIRST tries to get the kids more into hands-on learning and building to think outside the box and come up with ways of building drivetrains and armatures and whatever other hardware a robot may need.  Kids that have an interest slanting more toward sales and marketing help get donations from local businesses, build up the team website, do the graphic design of the logo/t-shirts/posters/business-cards, edit video of the competitions, and all that.  And as a whole, the team learns to work as a team.  It’s not just a nerdy kid building robots — it’s modeled more like a real-world company with departments and teams focused on a common goal and deliverable.

At the end of the term, the robots compete, but it’s a sort of cooperative competition.  It’s not Battle Bots, with the goal of stomping the other robots flat.  The competition’s goal is announced at the start of the term, with the robot built to achieve the goal — pick up balls from the floor and put them in baskets, climb a pole quickly, pick up inflatable colored rings and put them on the correct colored hooks, that sort of thing.  They somehow work it so that you’re allied with a couple of other teams, then they switch up the groupings.  If your robot accidentally breaks a competing team’s robot, it’s in your best interest to send someone over to help because next round, that team may be an ally.

Overall, it was eye-opening.  I can’t even imagine how cool it would have been to have such a team back when I was in high school.  I had to make do with working on computers in a “word processing” class that was geared toward training kids to be secretaries.  I did get to take a power mechanics class and completely disassemble then reassemble a lawn mower engine, which was fun, but not ultimately what I was into.  I think that a robotics team would have exposed me to hardware, software, video, and marketing and would have given me a more well-rounded tech education than just algebra, geometry, and calculus.