When you first start out with the laser cutter (for me, not in-person but via a service like Ponoko), it seems that everyone’s “hello, world” project is a set of coasters.  I have done a couple of projects since then, but have had one in particular in my eye that is actually not that much more complex than the coasters.  As a raw material, corrugated cardboard is extremely cheap, and we have a couple of old cardboard cat scratchers that I had to throw into the recycling, so I thought I would combine these to make my own cat scratcher.

The cat scratcher design I had in my head was nothing new.  I have seen many designs that are, effectively, lots of layers of cardboard sandwiched between two boards, all held together with bolts.  I wanted to make something like this triangular design that I saw on ModernCat, but with a more wavy style, like this other one. 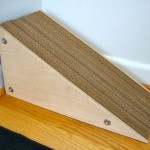 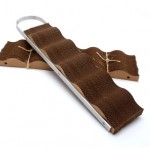 I did up my design, first on paper, then in Illustrator.  I calculated how many layers of “filler” are necessary with the thickest cardboard to make a nice big corrugated sandwich.  In the end, I had designs that looked good at the time, but now that I see them side-by-side with the above wavy version might have been a bit too wavy.

As I recall, I needed three copies of the filler laser-cut in thick cardboard.  This particular wooden-end design included one wavy pair with the cats’ names engraved, one plain wavy pair, and one square pair — this was mainly because I had a lot of excess space in the wood.  At the very least, I figured I could use the extra pair of square ends to manually make a scratcher by mauling some cardboard boxes with a box-cutter.

As usual, it took a few rounds of revisions to get Ponoko to recognize the design.  Their uploader, understandably, is quite picky about your files.  Etch lines must be the correct color and thickness.  Etch areas must be the correct color.  Cut lines must be correct, and so on.  I finally refined the design to a format that passes the upload gatekeeper and clicked through to get an estimate.  Given the cutting and etching on the wooden ends, I expected them to be a little spendy, but they are reusable.  The really disheartening part was that the cardboard filler was $1.95 in material and $49.30 in cutting.  The whole cat-scratcher would cost just over $90.  Ouch.

As Microsoft BASIC used to say: “Redo from start.”  Back to the drawing board.  I decided I would cut the cardboard myself.  Between shipments I occasionally get and Kim’s business, we have a ton of cardboard boxes lying around and I could spend some time and elbow grease with a box cutter.  This meant a rectangular design because I was not going to sit around cutting wavy lines by hand.  I would have to buy the hardware (wingnuts and bolts) regardless of how I manufactured it, so went out to seek those from Home Depot.  While there, I got inspired by some ornate moulding.  I decided to base the design around nicely stained moulding and not laser-cut pieces.  This also allowed me to make my design a little longer than the original and, at just over $2/ft, was way more economical.  Laser cutters, you are cool, but you are not for this project.

I looked around at the selection of bolts of a usable length and could not find one I liked.  At that size, you are mainly looking at hex bolts and carriage bolts.  I didn’t like the aesthetic of the hex bolts.  The carriage bolts looked a little better, but I didn’t like the way you have to make an extra cutout for the extra thick square part of the shaft near the head.  I decided to just go with a threaded rod.  I could cut that down to any size with my favorite Dremel attachment: the carbon rotary cutter.  It had the added bonus of looking more symmetric.

Cut And Finish The Moulding

I started with the afore-linked moulding and sliced it down to an arbitrary length based less on measurement and more on having four complete patterns on each piece.  I threw away a few centimeters at one end as scrap because the board started mid-pattern.  I also used this time to visualize where the holes (and consequently, the washers and wingnuts) would sit within the pattern.

The edges were rough and needed some sanding.  As I recall, I started with some 80-grid sandpaper and graduated up to 220-grit.

Although nobody would ever see the back, I thought I would sand out the stipples that, presumably, were left by the manufacturing process.  It would make the back look a lot better, especially after staining.

I found it terribly useful to do this with a disc sander versus sanding by hand.  I also found out, the hard way, that having a piece of butcher paper between the wood and my work surface would prevent the wood from picking up dirt and old paint from the table.  While sanding the back, the face picked up a bit of old green paint that I had to carefully sand out.

I then drilled and filed out the holes.  The drill bit was just a size up from ¼” to allow the threaded rods to easily slip in.  This is one step where I may have to do a bit more research on the best way to perform this next time — if there is a next time.  Quite often, when I drill a hole and do not want to leave splinters around it, I will put a piece of masking tape on each side of the wood.  This method did not work so well in this instance.  I am not sure if it is because of the shape of the face, the density of the wood, the speed of the drill (I tried a couple different speeds), or the sharpness of the bit.  At any rate, I got a few more splinters than I would have liked.  I both cleaned up the holes and performed a bit of surgery on the splinters with a small file.  At any rate, any splinter-induced imperfections would later get covered over by a washer. 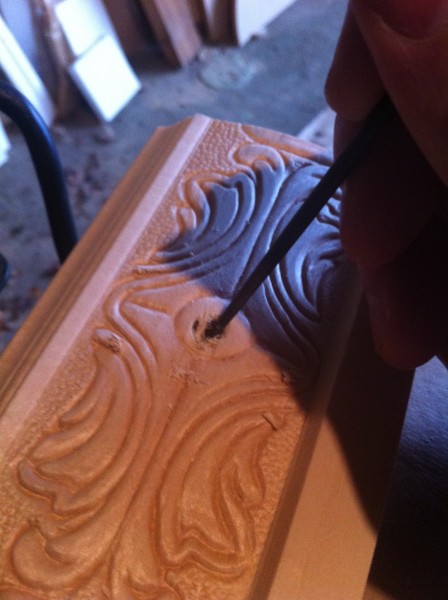 I then put a few coats of stain on them.  This took a lot longer than expected because of the freezing temperatures we had that week.

The next step was to cut the cardboard.  I basically just took a cutting mat and a box cutter and attacked the cardboard.  By this time, the wooden ends were dry, so I used them directly as templates.  Since the boxes had slots in them for the top/bottom flaps, I had to work around that.  I used masking tape, on both sides, being sure to keep it a few millimeters from the edge so it was not sticking out or visible when the cardboard gets sandwiched.  I also pushed the cut flaps close together when taping so that there was no gap between pieces.  I also made sure to pull off any leftover packing tape because I wanted to guarantee the exposed cut ends were just cardboard — no masking tape, no plastic packing tape, no shipping labels.

This left me with a lot of cardboard (this is three small-to-mid sized boxes worth), cut to the right size.  If I were to do it again, I probably would have cut the holes for the threaded rods as I went instead of waiting to drill them at the end.  I could have just marked through the wooden piece’s hole with a pencil, then used the box cutter to make an oversized square or diamond hole.  The hole does not need to be all that accurate or even round  because it gets sandwiched together and held by compression. 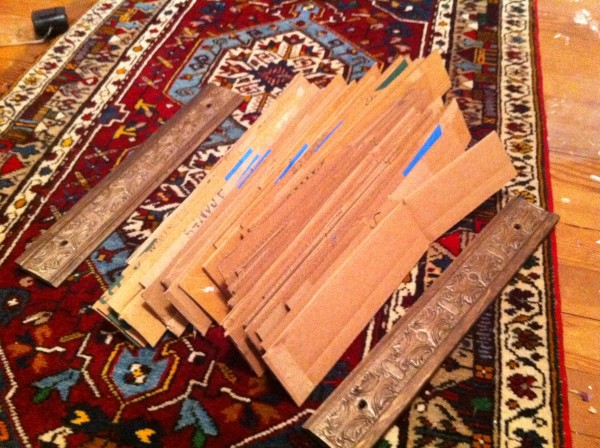 I rearranged the cardboard strips so that I did not have too many masking-tape-gap ones or ones with folds next to each other — for better looks and structural integrity.  Finally, I held everything (loosely!) with clamps and drilled some holes for the rods to get through.  This took several tries because my drill bit was not long enough to go from one end to the other.  I had to drill in one hole, then go around to the matching hole on the other side.  Since I was doing this by hand, the holes were not perfectly straight and did not quite match up.  It took a few attempts to get a complete hole from one board to the other. 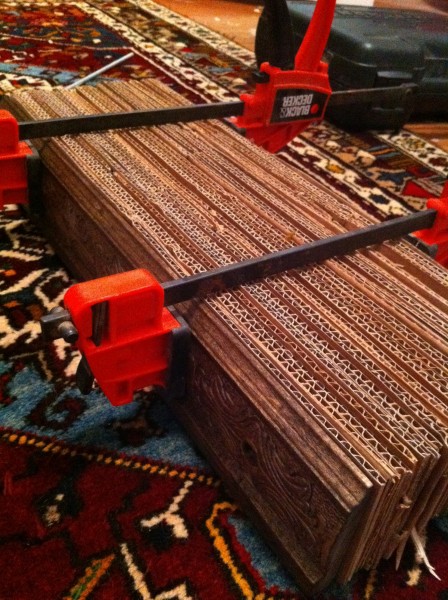 I was then down to assembling and trimming the hardware.  I put the threaded rod through one end, attached wingnuts and washers, trimmed it, and then did the same for the other end.  I also made sure to deburr any rough cuts in the metal.

Leave out for the cats, throw on a little catnip if you like, and observe the results. 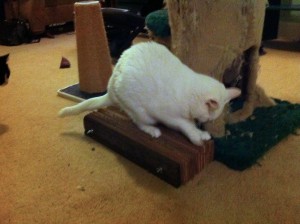 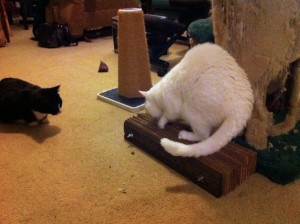