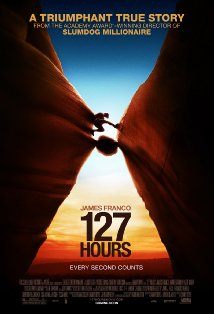 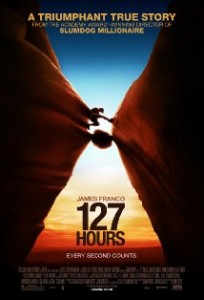 I saw 127 Hours this afternoon.  For those that have not heard of it (I only just learned of it in recent weeks), it is the story of a guy who goes out climbing alone, without telling anyone, who then gets his arm pinned by a large rock.  He’s out in the desert for 5 days before releasing himself and finding help.  Overall, it was a great movie — a good character study (because, really, how much action can you have in a small canyon over five days?) and was gripping and suspenseful.  A few other thoughts I took away from the film:

There were a couple of places where I half-expected to see Jigsaw pop out from behind a rock.  Well, jokingly to myself, but yeah…  A great film that I recommend, but I recommend it with a strength that is inversely proportional to your squeamishness.