This past weekend, I went to a pre-Thanksgiving party. It was a fun event and I met plenty of great people. It was obvious that the two roommates hosting the party had groups of friends with different tastes. Their Venn Diagrams overlapped by only one or two people. One roommate and company were in one room watching “the big game” on television while drinking Bud Light. The rest of us were in another room discussing, among other things, Joss Whedon. Despite this self-imposed segregation, it didn’t feel weird at the time and everyone had fun. Toward the end of the evening, after the sportsball people went off to a bar, the Jenga set came out.

Truth be told, I do not think I have played Jenga since elementary school. It was fun and challenging. A few games in to the evening, just as a block was being pulled out, someone brought out his iPhone. He previously loaded the phone with what is either the worst or best album ever for playing Jenga, depending on your perspective. 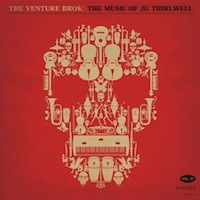 “The Music of JG Thirlwell”, who apparently does the music for the Venture Brothers, in an album with several tracks that seem specifically engineered to induce brain aneurysms during Jenga. Fast paced. Strong drums. Lots of horn blats. The tension and anxiety arrive instantly and are so thick you’d think you were diffusing a bomb as the timer nears 0:00.

I think the specific track on that album that caused the most anxiety for all was Assclamp!.