I have had a Kindle for a few months now and really enjoy it. I have been reading like I’ve never read before! The size and convenience are great and, for many texts, far outweighs the longevity and space requirements of paper books (even though I love having shelves and shelves of book spines to look at, like trophies of conquered knowledge).  Really, all I need are the words, regardless of format.

That being said, there are some paper books that are virtually required to own. If it pleases the court, I would like to introduce Exhibit A. Pictured next to the Kindle is the Hitchhiker’s omnibus of all 5 books in the “trilogy,” plus a short story. 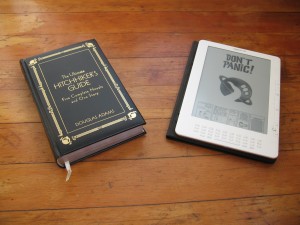 These books should be required reading for all humans on the planet, and I am quite proud to have a dead-tree edition.  I re-read (most of) the series a few weeks ago on the Kindle.  Unfortunately, slightly over one-fifth of it is currently unavailable for the Kindle! This is where my problem lies. Given the picture in Exhibit A, which mainly focuses on the front surfaces, you’d think they were both about the same. I would now like to introduce Exhibit B. 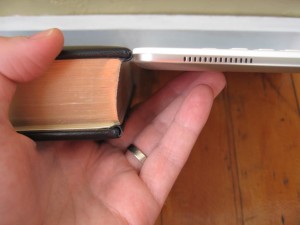 The item on the left does not comfortably fit in my messenger bag, whereas the item on the right (which contains 4/5 of the item on the left) is not much thicker than the front cover. Admittedly, I cheated a bit and took the Kindle out of its protective cover for this shot, so it is really about a centimeter thicker, but it still fits comfortably in my bag.  And holds thousands of books. In fact, according to my records, I own 523 books (some of which are pictured below), and the Kindle holds roughly 6 and a half times that. That’s a lot of books to be carrying around! 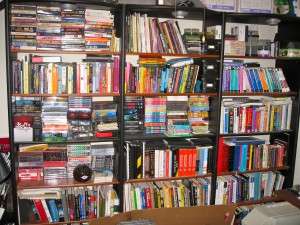 But getting back to my point, I don’t think I will be re-reading the final Hitchhiker’s book, since I cannot carry it comfortably around.

Oh, and one last thing. It used to be that I would frequently spend money on books that looked interesting at the time, in the hopes that I would read them — and then they would sit, forgotten, on the shelves. I basically still do the same, but now I just collect sample free first chapters. This is a lot better on the pocketbook and the collection acts as a wishlist of sorts. Currently at the top of the queue (and I think I’ll buy it later this evening I bought it between drafting and publishing this post) is Spook: Science Tackles the Afterlife by Mary Roach (who also wrote Stiff: The Curious Lives of Human Cadavers). Although by looking at the table of contents, I feel as if I have been introduced to a lot of Spook via episodes of WNYC’s Radio Lab, it still looks like a worthwhile read.