The California trip last month was fun. I think I mentioned it before, but it was “Christmas in February.” My parents flew us down there because we had neither the time nor money in December for travel, having just bought a house and all. It was great to see everyone we did see (but would have been greater to see some folks we didn’t get a chance to see. I’m talkin’ to you, Jeremy and Noel.)

The trip down was a cascading failure of delayed and missed flights. Given the scheduling, in the end it was faster to fly from Portland to Seattle to Orange County. At one point, after hanging up the cellphone, my iPhone freaked out and did a hard-reset sort of thing. I’ve been hacking the iPhone since it came out and have had individual applications crash, but never had the phone reboot. I especially never had it reboot to the “you must connect me to iTunes before I’ll let you do anything” screen. The sync cable, of course, was at home. I packed it in my bag, but did one last sync before leaving so that I could grab some last-minute podcasts, and I guess I was on mental auto-pilot and returned the cable to its home in a desk drawer, not back to my bag. Upon landing, I had to hit up Fry’s for an extra cable.

We got to see my parents, which was nice. My dad is getting a bit old, and it is really starting to show. He pretty much needs a walker any time he goes out (but often, stubbornly uses a cane instead, which doesn’t exactly provide the support he needs in all instances.) My mom’s a trooper for everything she does for him.

We saw my Grandma, which was also a bit saddening. She’s living in an awesome place–the kind of place that I might not mind living when I’m old. It is basically has the feel of a sort of co-op house in suburbia. There are five(?) little old ladies living in this house with a fulltime caregiver. It literally is a house, with a sunny front yard and a sunny private back yard. They have dinner at a dining room table and watch a big screen TV from comfy sofas. It doesn’t smell like hospital or little-old-lady. Unfortunately, I’m not sure that my grandma recognized me. It kind of felt like she was going through the motions. This was especially apparent when she commented “my, how you’ve grown” to Kim.

We drove out to Kim’s parents’ place. We hung out with them for a while, and they were…. well…. Kim’s parents. If you know them, then you know them, and if you don’t, it would take far too long to describe here. Dinner there was roast beef (even though we were asked about dietary preferences a few weeks before.) I don’t really eat cow, but when faced with the alternative of starving, I ate it. My stomach didn’t thank me for the rest of the trip.

I got to see a lot of the old Diedrich’s Table folks at what is now Bon Giorno. Conrad, as usual, was great to be around. Jared unexpectedly showed up with Chili Beer! Holy cow! I totally flaked on photos and almost forgot I had my camera for most of the trip! 🙁 After D’s, we rendezvoused with Les and Rachel and friends (Dave, Bethya, Laura, and J) for a mellow evening of chatting and drinking. Actually, this spanned two evenings. At one point, Kim remembered that I had a camera and snapped a few photos of Penelope: 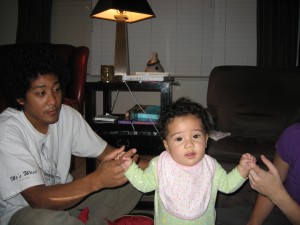 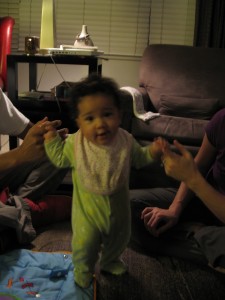 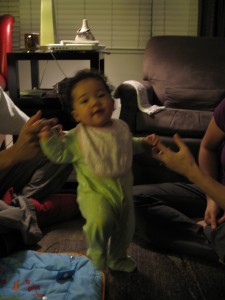 Oh, there was a trip to Shin-Sen-Gumi crammed in there somewhere. Why doesn’t Portland have a good noodle house?! 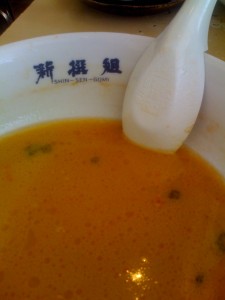 There was also a quick trip to Gothla: The Conjuring, a gothic bellydance event in Fullerton. Because of scheduling, we couldn’t stay for more than a few hours, but it was a fun event to be at.

The last day was Disneyland. We didn’t have nearly enough time because it was the same day as our flight home, but it was great to be back. Another thing that Portland needs is a theme park for which I can get a season pass. I finally got to see the new Pirates of the Caribbean ride with the Captain Jack Sparrow character in it. Last time I was there it was either still under renovation or closed for the day. This was also the first time that I got to be on “the new, new Space Mountain.” I’m glad they got rid of the blatant FedEx advertising, but I liked the previous scifi-surf-guitar music better. The spinny light-show in the beginning was cranked up to eleven! I was starting to feel a little spinny, myself. The new submarine ride was a big yawn. It felt like someone popped in the Finding Nemo DVD and fell asleep while leaning on the fast-forward button. I was surprised to see that the Haunted Mansion had a few updates since the last time I was there. The bride room(?) was all different (and better), they changed the moving walkways from painted spots to painted victorian floral patterns, making them resemble moving-rugs, and there were far fewer spring-loaded pop-up-out-of-urns heads (which always had the accompanying telltale pneumatic hiss.)

The return trip, fortunately, was rather uneventful. My stomach was still bothering me, so I went with the “wedge of iceberg” salad at the airport restaurant, which more than adequately described the meal. I probably should have asked what kind of vodka came in the martini, because although it was very nice vodka, it was also a $13 martini. 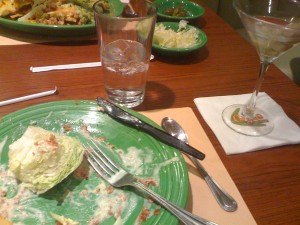 The weekend went by entirely too fast. A week would have been much more enjoyable, but not something we could realistically do.

And with that, I think I am caught up with all my backlogged blog posts, photos, and video.