So. World Without Oil. I have refrained from posting much about it because I could never quite wrap my brain around explaining it to people, but let me give it a try. It’s a “game” that is less of a game and more of a thought experiment. Let’s say that because of Peak Oil, war, limited resources, or whatever reasons, gas prices suddenly skyrocket. There are lots of academics and scholars that have all sorts of lofty things to say about the whole deal, but they are easily glossed over by everyday people because they seem so lofty or so far in the future that nobody cares. World Without Oil tries to look at it not from a lofty point of view, but from an everyday man-on-the-street perspective. They pose a lot of “what if” situations. If gasoline was suddenly $6.00/gallon, with limited availability, what would happen? How would it affect you. Yes YOU, reading this right now. Would you be able to commute to work still? Would you be able to buy new, imported things considering the cost of shipping is tied to gas prices? If your local power plant runs on fossil fuels–how would you handle the frequent brownouts and blackouts? And the most important question: what can/would/should you do about it all? People post their ideas and tips about conservation. You can read, learn, and post your own.

A lot of the ideas people post are granola-munching hippie community-building and self-sufficiency plans. The “hippie” part doesn’t necessarily say it’s bad, it’s just a label that conveniently describes a particular class of ideas. For instance, the obvious answers to an oil shortage and gas price hike are to bike to work or take public transit–or maybe buy a more fuel-efficient car. For some, it might be to grow your own vegetables. In Portland, we are pretty lucky in that there are plenty of Farmer’s Markets around with lots of organic locally grown veggies. Elsewhere, that stuff needs to be shipped in by the truckload, and if gas goes up, shipping goes up, so the cost of the veggies goes up.

Okay, so after all that buildup, the particular tip I am posting today is not as lofty as, say, when I signed us up for wind power or revolutionary like some kind of at-home DIY biodiesel conversion kit for any make, model, or year of car. It’s pretty humble, but it adds up over time.

During the work week, I eat out. A lot. Virtually every day. Yes, I can save money by packing a lunch, but that’s not the point of this post. I don’t eat any fast food (the grease turns my stomach into knots), and try not to eat at “nice” sit-down restaurants too often. There are a class of not-quite-fast-food and not-quite-sitdown around here, usually Mom-and-Pop operated joints, usually with somewhat healthy items on the menu, where you order at a counter and sit at a booth and either your name/number is called to pick up the food or they come deliver it to you–no waitresses or anything. Everyplace has a soda machine, but I don’t drink carbonated drinks (see: stomach into knots, above.) I’m always drinking water, but the water from those soda machines is not always the best. It usually comes from the same spout as iced tea or super-sugared-lemonade. It’s filtered tap water, but sometimes the filter isn’t always so great. Most of these places have bottled water, though.

So that’s a rather long-winded way of saying that I like to drink water at lunch, but the only palatable option, for all of the above reasons, is bottled water. Up until about a month or two ago, I would always buy the bottled water, assuming it was my only option. But that adds up. A lot. Consider someplace is selling a 1L bottle for $0.99 retail. Yes, you can get it cheaper by buying a case at the supermarket, but at a restaurant or 7-11, it is sold individually. That $0.99/L works out to be $0.99/0.26417 gallons. Flipping that around shows bottled water priced at about $3.75/gallon. That’s more expensive than pre-World-Without-Oil gasoline! And I was buying it almost every day. That raised a pretty big double-u tea eff. And when you’re done, you are left with an empty plastic bottle that gets thrown into the trash because most restaurants don’t bother with recycling them.

At that point, I decided it was time to bring my own water. I have filtered water at work that is, effectively, free. I have a nice Nalgene bottle. I tried carrying it to lunch a few times, but it is a little too large, heavy, and bulky to feel comfortable carrying the distance I have to go to walk to lunch. Then, I happened upon a rather nice find at a local sporting goods store: 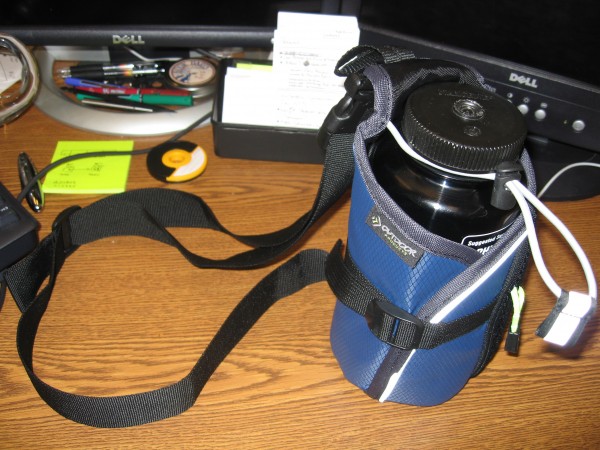 It was only a few dollars. Now, I can comfortably carry a full 1L bottle of water to lunch, slung over my shoulder. It saves I don’t know how many dollars (or hundreds) a year in stupid pre-bottled water. Obviously, the DIY’ers can probably make something similar from scrap materials.

Like I said, it’s not an earth-shattering tip, but it has:
* ended up saving me lots of money almost every day
* made the environment better by not throwing away a bunch of plastic bottles (and reduced the demand for those bottles by one, which may eventually help reduce the amount of their production–helping to save the environment on the front end, by not producing them, rather than the back end, by not throwing them away)
* made the air every so slightly cleaner, as the distribution of those bottles is likely by a motorized vehicle (as opposed to a network of underground pipes) and there’s one less consumer