When the huge HD-DVD decryption code rebellion hit Digg, people came up with a ton of creative ways to convey the code without actually typing it out. There were a few half-assed attempts to make it into a “song” (read: some guy with a crappy computer microphone that really should not give up the day job for a career in song.) Now, it turns out that a professional recording artist (I believe he mainly does jingles and advertising, but has also released a number of songs: Geoff Smith) decided to take a stab at it. Then Cali Lewis (of Geek Brief TV) collaborated to made a music video. I don’t know if the footage of her with the Digg guys is new (I’d guess not) or video of her interviewing them some time in the past, but it’s cool to see Kevin and Alex in there.

I have no idea how/if the embedded video will work on the LJ crosspost (normally, I’d use a picture and have that link to the video, but I cannot seem to find a permalink for the video in Podshow’s weird interface.) Here goes… I just used the direct link to the Flash file as a permalink. It is not the best, as it opens to the full browser window size, but it’s better (in my opinion) than an embedded video sucking up browser/system resources. 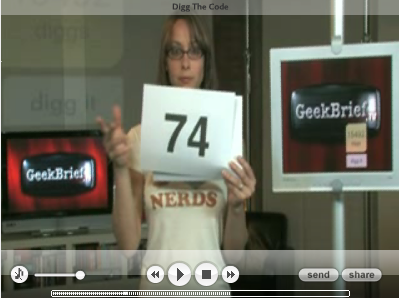 Yes, the music isn’t really my style of music–it’s a little too happy-bubblegum-pop, and the video is a bit (okay, a lot) on the cheesy side. It’s still good to see a well-produced song+video arise so quickly from all of this.

4 thoughts on “Digg The Code”