Please note that all blog posts before 8 April 2007 were automatically imported from LiveJournal.  To see the comments and any LiveJournal-specific extras such as polls and user icons, please find the source posting at http://brianenigma.livejournal.com/2006/06/

Last night, on my way home, I got stopped in a line of cars on that little ramp leading from Naito Parkway to the Hawthorne Bridge, while the bridge lifted to let a big boat through. While sitting there, idly looking around, I turned my head left, toward all the construction, and what did I see staring back at me on the side of one of the construction vehicles? I wonder if it is left over from the Horns Across Hawthorne stunt a few weeks ago? 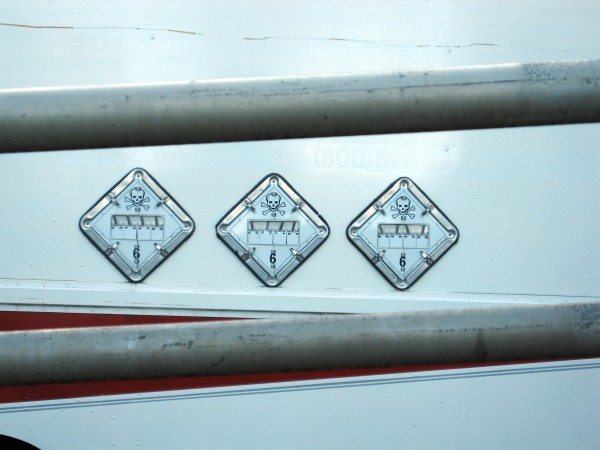 Later in the night, in support of Bites for Rights, we went to No Fish! Go Fish! for the first time. The food (mine was mahi mahi, Kim’s was baked butternut squash) was outstanding and came with cute little garlic parmesan grilled cheese sandwiches as appetizers, which looked like they were made in one of those little As-Seen-On-TV electric sandwich presses built like waffle irons, only these particular sandwiches were made using nice 3D fish-shaped molds. The drinks were great, albeit a bit strong (mint-cucumber martini and key lime martini.) The service, on the other hand, sucked mightily, even by Portland’s (s)low standard of service.

The previous evening was the second Da Vinci lecture. I think Kim summed it up quite well, so I won’t bother duplicating it here.