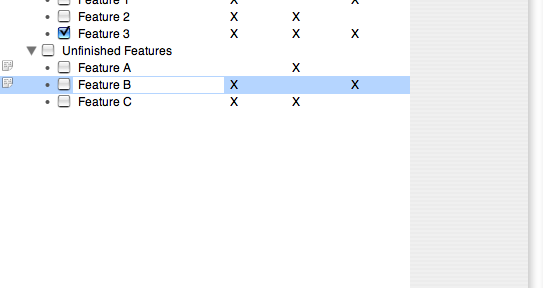 Please note that all blog posts before 8 April 2007 were automatically imported from LiveJournal.  To see the comments and any LiveJournal-specific extras such as polls and user icons, please find the source posting at http://brianenigma.livejournal.com/2005/02/

At work, we suddenly have the need for keeping a giant collapsible feature matrix of stuff. Across one axis are the core features and across the other are the products that support them. When complete, there should be little checkmarks in all of the squares in the grid. In theory, we could make a gigantic spreadsheet in Excel, but the collapsibility and hierarchy makes the whole thing manageable (i.e. “people would actually use it.”) I have a Mac program (OmniOutliner) that would work perfectly… if everyone had a Mac. It creates stuff like this: 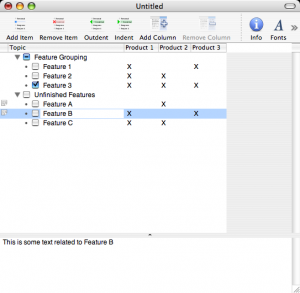 What I would really like to find is something that can do this on Windows and Linux. It looks like some standards bodies out there have developed cross-platform file formats for this kind of thing. OmniOutliner supports OPML. There is a SourceForge project for OML. Unfortunately, I am not seeing any apps (Open Source or otherwise) that do this kind of thing for Windows, much less Linux. There are a number of programs that do the indented bullets, but those extra columns (thereby creating a grid) are key.

I would hate to have to sit down and write a cheezeball Java app to do this, but I am beginning to wonder if someone needs to. Has ANYONE out there in the LazyWeb BlogoSphere seen or used anything like this???