Please note that all blog posts before 8 April 2007 were automatically imported from LiveJournal.  To see the comments and any LiveJournal-specific extras such as polls and user icons, please find the source posting at http://brianenigma.livejournal.com/2004/11/

Thanks to a generous birthday grant from Momma and Pappa Enigma, I am now the proud owner of The Office Christmas Special and the final season of Buffy. I believe I will not be leaving the house for a week. It has been nice knowing all of you. I will see you after the last DVD has ejected.

In other news, the cats have been bathed and have been given their first treatment of those drop things you put on their neck to prevent them from being fleabitten mongrels. My shoulder has been mortally wounded in the process.

Dream from the other night: I was working (studying?) at this weird scientific place. Basically there was a very, very large room that people made up like a movie set. It was a sort of rocky canyon type of area with broken statues like Moai heads, but it was all artificial and imagineered. When explorers went into this prop-like room, the door would close, and some technician would make scientific magic happen. The people in the room would be somehow transported to a planet far across the universe, but this planet looked exactly like the way the room was set up. It was no longer the movie-prop room, but a real location on a foreign world that looked just like the prop room. I either worked or studied there at a little desk in a big room full of other little desks. It was very much like a school room and in fact, I was carrying the four calculus textbooks and three physics textbooks I had in college (and subsequently inventoried a few days ago with the barcode thinger). By “carried,” I in fact mean “kept dropping a textbook or two at the most inopportune times.” Also, there were keycard locks, much like the nonfunctional ones we have at work, and I kept accidentally using credit cards to try to open them, consequently failing to open the doors and dropping textbooks–typically with people around me waiting to use the doors.

Over the weekend, I picked up a very nifty and decorative oil lamp for Kim as a six month anniversary gift. It runs on olive oil, uses Q-Tip fluff as the wick, and has a little metal cup for aromatherapy oils. In keeping with the green hippie Oregon spirit, it is handmade from unpolished recycled copper. I also picked up one for myself. Below is mine, which has a much more industrial style. I did not get a picture of Kim’s, which is much more artistic, sort of shaped like flowery leaves. 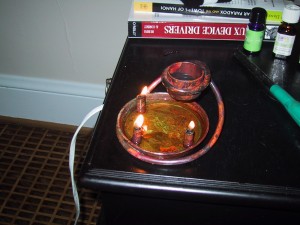 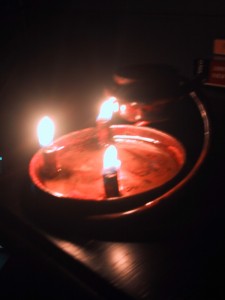 The last few evenings, I have been trying to live by just the light of the fire in the fireplace, the oil lamp, and some candles. I had to make a bit of an exception for kitty baths, but have been pretty good otherwise. Each “wick” in the lamp is supposed to be something like nine times as bright as a candle and there are three of them, so it is plenty bright to read with if things are angled correctly.

I keep getting sucked into the Lemony Snicket books (temporarily on pause because of the heroin-like Buffy DVDs) and still cannot wait until the movie! I watch the trailer all the time.

….okay, so the second episode of the season just came on. Why do I feel like I am watching Alias?