I work in a building owned by and containing a bunch of Orange County real estate agencies. As such, it is a rather expensive building, paneled inside and out by marble, with lots of glass. All of the doors are inch-thick sheets of glass, with a pin in the top and bottom for hinges and a strip of metal across the top for the new-fangled magnetic locks (which somehow seem to remain locked, even during a power failure).

Today they were replacing a number of the exterior doors. Why? I do not know. They looked fine to me. The new doors looked exactly like the old doors. Maybe there was a little scratch that a real estate agent did not like, causing them to buy brand friggin' new, likely excessively expensive, doors. The cool thing about the whole process is that the installers had these gigantic suction cup devices. The big, round, industrial suction cups looked less like the suction cup handles used to pull up floor panels in 1970's computer rooms, and more like the suction cups a superhero would use to scale a building. All through the day, I had dreams of stealing those things and walking up the side of the building. Come to think of it, all day I also had dreams of getting buckets of water and paper towels and lobbing the equivalent of giant spitballs onto the windows of my 2nd story cow-orkers. Is this normal?

I get lots of crazy email. Everybody with an apparent age less than 14 seems to think that I am some sort of uber-hacker. I happened to write a few accessories for a hacking tool a number of years ago that I no longer support (and no longer CAN support), and now everybody who wants to be Zero-Cool or Neo decide that I am their mentor. “You teach me to how hack, yes?” I still get about between one and ten of these a day, but this is the first in a SCRIPT font (or at least the first one I have been able to see, now that I finally dropped Pine in favor of the Apple Mail.app): 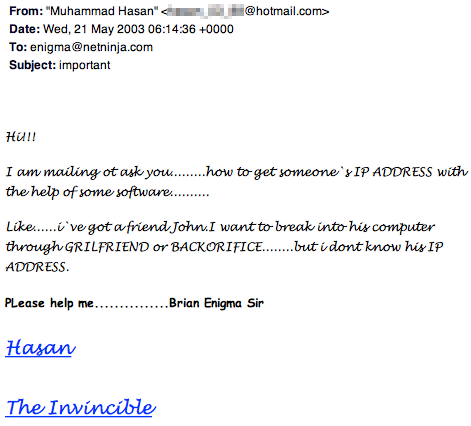 Oh, and I got two copies of this message in a row. Somebody decided it was important enough to send two exact copies. You will also note that the text that looks like a link (underlined and blue) is not. It is simply colored blue and underlined. PLease help me…….Live Journal Sir. This one was not one of the REALLY crazy ones though. Maybe I should post a few of those–like the ones from El Fucker, MeNoIckyHo, et.al.