Forty Helens agree: using a nicotine patch as a rolling paper is a bad idea.

Dream
Last night, I had a very strange dream. It was not scary, it was just full of anxiety. It took place in a building that had been in several previous dreams, and the building is the most important, strangest, and biggest source of anxiety in the dream. This building works kind of like the old Disney America Sings ride, which was a round building with a stationary central hub and a rotating outer ring, which rotates so slowly that you get the impression that whatever part you are not on is moving. The building in the dream, though, has several concentric rings. It is hard to tell what is stationary and what moves, but the outer shell, with windows and doors, is stationary and only accessible from certain locations in a(n underground?) parking structure, so you do not know that it is a cylindrical building. The building does not constantly move, like America Sings, but only every few minutes, and it tends to move much faster.

This building is decorated kind of like an antique house, kind of like a fancy pirate's home, and mostly like the Winchester Mystery house. It has a number of doorways that do not necessarily lead to anything but a brick wall (which may change, based on the building's configuration). It also has a large number of quaint little windows in interior walls–sometimes just open, and sometimes little panes of glass with a horizontal and vertical little wooden piece to make it look like 4 smaller squares. These windows grant access to other rooms, just like a doorway, but are sometimes the only way into a given room. At this point, you may be noticing a striking similarity to the movie Cube.

This particular configuration makes a beautiful looking house, but one that causes the situation to be a little more complicated when being chased by persons unknown. Once the rings in the house have recently spun (and in some rooms you can REALLY feel the centripetal force of the movement), you are free to run through doors (if you can find ones that have a room, instead of a wall, on the other side) and climb through windows. As the minutes pass from the previous reconfiguration, you are left to gamble on whether to stay in the current room for a few minutes or risk climbing through a window between two rooms and possibly getting sheared in half (again, much like the movie Cube or the ride America Sings!).

Music
I picked up a Harry Belafonte “best of” album the other day. I also got the new Weird Al. It has a number of not-so-great songs, but a few really good ones. I really like the Billy Joel sounding “Oh sling me a web, mister Spiderman.” The palindrome song, Bob, as well as Genius in France (which seems, indirectly, to be about Jerry Lewis) are also quite good. Most of the songs are parodies of rap or R&B, so I do not really enjoy the parodies as much as previous albums, but they are still good.

There was an extra server rack hanging around and it was slowly transformed, piece by piece, into a guillotine. I especially like the basket at the bottom. Next step: make it functional. 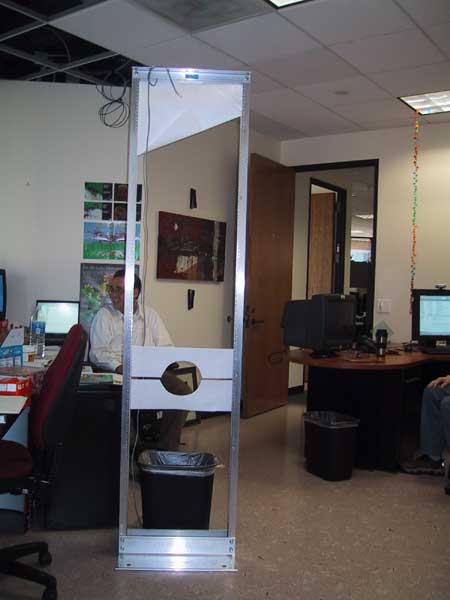 We found an old org chart the other day. This chart dates back about a year. The pink indicates individuals that are still there. This chart was taken from a time when the company was trying to move away from software and toward developing training courses. As such, the people in my department are not really on the chart–we are basically those legendary pink dots in the upper right quadrant that do not actually correspond to boxes. The entire left chunk is marketing (BANG! Gone!). The next big chunk over is sales (BANG! Gone! …with a few new people who were not on the old org chart). 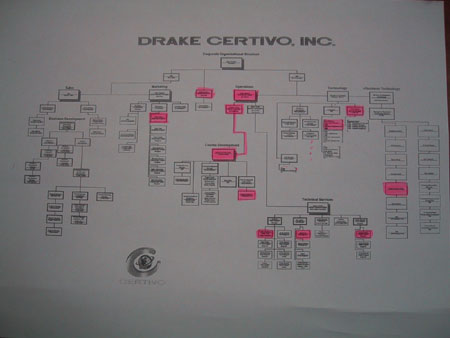