For halloween this year, some friends did a sort of “mini haunted house” in their garage. The plan was to mix having a small party with handing out candy and to just have the whole tableau exude a sort of spooky ambience. It sure beat watching scary movies, putting them on pause every few minutes to answer the door. The underlying theme was to create a sort of Beetlejuice/Tim Burton speakeasy. 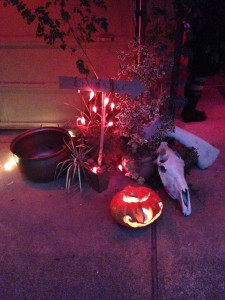 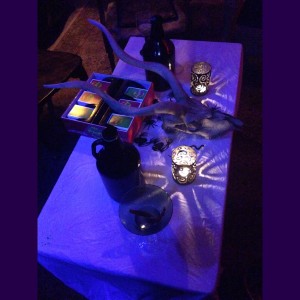 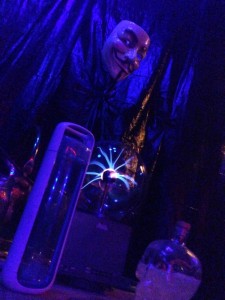 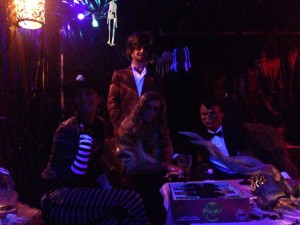 Early on, I volunteered to do some electronics projects to help spook things up. There were two main projects I worked on. One provided ever-shifting ambient lighting that could instantly switch to the flash of lighting and the boom of thunder at the press of a hidden foot switch. That will be detailed in a future blog post. This post is about the trio of electronic eyes that seem harmless at first, but that get evil and angry when you get too close.

For the eye project, I ended up with three pairs of eyes. We stashed these in the bushes leading up to the speakeasy. Friendly creatures peeking out of the bushes. Or are they friendly? These pictures don’t do them justice, since the light of the LEDs blows out the camera’s CCD sensor in the darkness of night.

The design and code were fairly simple and based largely on the Adafruit Roboface Arduino code and hardware. The original code uses five LED grids, two eyes, and three that form the mouth. 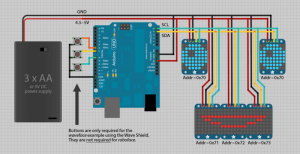 My variant uses only eyes, but modularly chains several of them together. The two eyes in the original code are functionally and electrically identical — in other words, they do not work independently and both display the same eye graphic. This is fine for simple round eyes that just look around (and that you don’t need to look cross-eyed). For mine, I wanted angry sloping brows, so needed each eye to be independently animated. I also went with the more expensive bi-color LED matrix. This allows the friendly eyes to be green and the angry ones red. The original also has zero interactivity. It just randomly animates. My version adds a motion sensor to detect nearby children in need of a fright.

The schematics are fairly straightforward and consist of a main control module and one or more sets of eyes. The eyes can be chained. I’ve tested it to three pair. I have no idea what the practical limits are.

The controller is on a laser-cut base with rubber feet. It holds the motion sensor on a sturdy arm of bailing wire. To better focus the motion sensor’s field of view, I crafted a little tube around its lens. A bit more crafting later and I had a gothic flower. Observant long-time readers might notice that the controller is actually the RF Test Board I used on the Chubby Tricorder project as part of The Curtis Game. 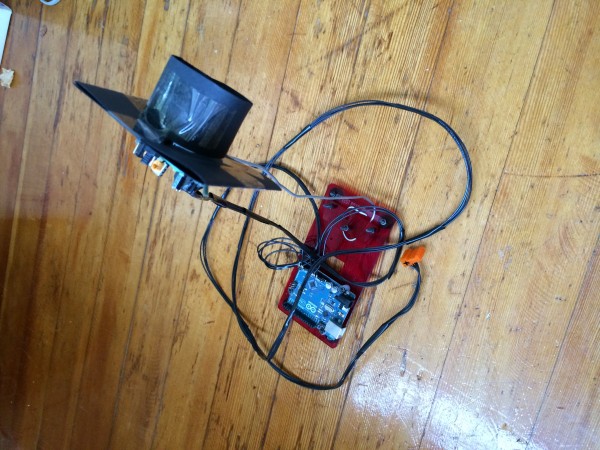 I went a little bit fancy and designed laser-cut acrylic frames to hold the eyes in place. It was excessive. You’re free to skip the step, but I found it gave me a good way to hang each pair of eyes. I had it done at Ponoko and used black matte acrylic. The EPS file is part of the GitHub project and is, unsurprisingly, simple and straightforward. 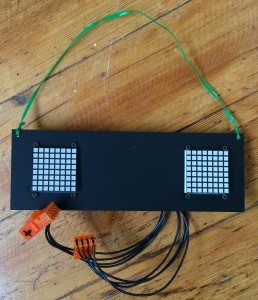 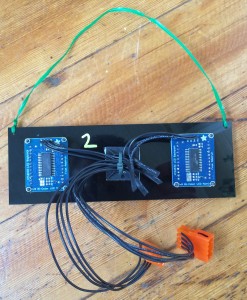 They went over well on halloween night. They had the added bonus of being a good early-warning system. We did not have a great line of sight to the driveway, but if we saw the eyes turn red, we knew someone was coming.

Again, more detail can be found in the GitHub repository.