So I have a few of those little power-brick sized AirPort Express WiFi units: 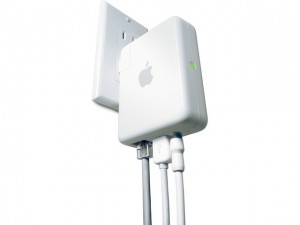 In the past, I have found them incredibly useful.  They pack away easily and can turn any wired connection into a wireless one or can act as a self-contained basestation for multiple WiFi devices. Since I have one or two spares and needed one for an upcoming thing, I used a pencil to push the little recessed reset button and plugged it in, causing it to revert to factory defaults.  I then loaded up AirPort Utility on my laptop and was told the device is too old for this version of AirPort Utility.  Why don’t you download an older AirPort Utility, instead? 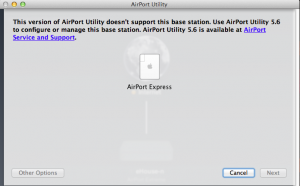 So I did, only to be told upon installing that my OS was too new.  Understandable.  No big deal.  I had just installed OS X Mountain Lion.  I went to another machine that still had Lion on it and tried there.  Same problem.  I think it needs Snow Leopard. 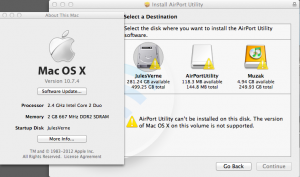 EDIT: I was (eventually) able to get it working by booting an old Windows system, downloading the Windows version of the old AirPort Utility, and then plugging the AirPort Express directly into the PC.  (It was not able to see the Express if it was simply plugged into the house wired network that already has other AirPort devices on it.)