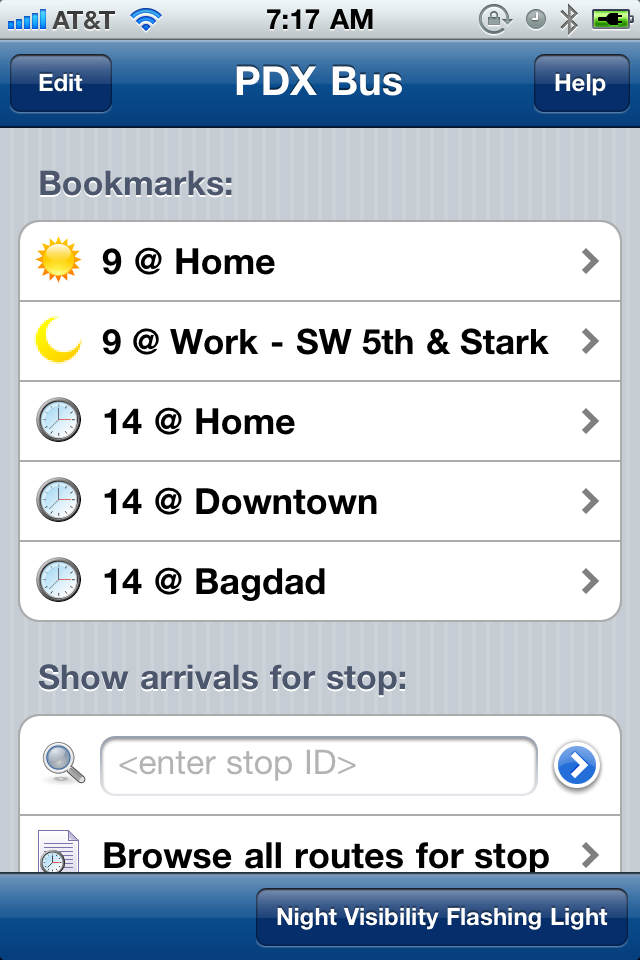 There is a free iPhone app that I use all the time called PDX Bus (iTunes link).  Portland has not only GPS-enabled public transport with extremely accurate arrival and departure times, they have opened up the data feeds for anyone who wants to request a free developer ID.  As such, we have plenty of apps and things that pull data from these feeds.  PDX Bus is one of them and, in my opinion, the best.  Its app icon has secured a coveted position on the first page of my iPhone.

PDX Bus has all the standard stuff you would expect from such an app: live timetables, maps, route finders, trip planners.  It also has some nifty bells and whistles such as bookmarking frequent stops and using your GPS to find what stops are nearby — useful if you are in an unknown neighborhood and/or the stop ID of an unfamiliar has worn off .

The 6.0 release added a new feature that I never would have though of requesting, but already looks like it will prove incredibly useful.  When bookmarking a stop, you can now optionally  give it a time window (such as weekday mornings).  When you launch the app during that window, it will automatically fetch the live data and go to that stop’s arrival screen.  This saves time and attention (launch app, wait for it to load, find bookmark, touch bookmark, wait for stop data to load vs. launch app, wait for data during which you can pay attention to something else, look back at screen).  It’s a silly little thing that doesn’t seem like it would make much difference, and maybe it doesn’t, but it really feels like it does. 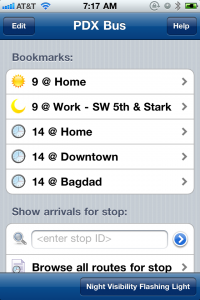 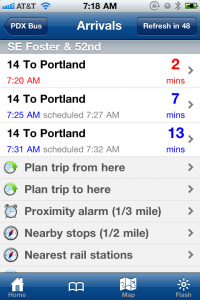 It also added a nice “proximity alarm” — a feature that some friends and I kicked around as being useful for unfamiliar routes, but never really thought to suggest to anyone.  Basically, if you are on the bus and your stop is coming up soon, your phone will beep and vibrate to let you know.  It should reduce the chance of missing your stop.

Overall, I am very impressed with the PDX Bus app and how it has improved over time.