I did something the other weekend that kind of pushed my comfort limits.  I fixed the refrigerator.  You see, usually when I task myself with fixing something, I actually know how to fix it.  At the very least, I have a reasonable idea of how to fix it.  This time was 100% guesswork.

You see, for a few weeks, the freezer part of the refrigerator has operated a little sub-par.  The temperature would sort of float just below, then just above, freezing.  It was always a gamble whether the ice-cube trays contained ice or just really cold water.  The ice bucket just wasn’t an option — ice cubes thrown in there would turn to water, then become a single solid ice-bucket-shaped ice-cube.

Although I was not sure, I kind of suspected it had nothing to do with any of the physics behind it all.  Things really would get icy-frozen.  So I kind of guessed that it wasn’t anything like compressors or freon.  (Do they still use freon?  Didn’t they switch to something more environmental?)  I guessed it was something electronic, something with the control mechanisms.  Fortunately, Whirlpool has a somewhat reasonable parts website.  They also have a somewhat useful freely available parts diagram for my model of refrigerator.  What they did not have was a way to better diagnose what part was bad, or even a description of what the various parts do.  What’s a defrost timer?

I guessed it was probably thermostat ($90) or defrost timer ($30), but had no way of knowing which it might be without ordering both.  It took a bit of work and some scratch up knuckles, as well as a bit of mumbled swearing, but I managed to get at the relevant parts and swap them. 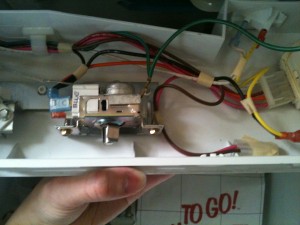 After replacing both (I now suspect it was the cheaper of the two that was at fault. C’est la vie.) everything worked fine.  The freezer was freezing and staying frozen.

You might say I took a risk.  By buying expensive parts that may or may not have fixed things, I gambled on whether I really could fix it.  Fortunately, I won.  Part of the payoff was that I only had to pay for parts.  An appliance repair person would have charged an arm and a leg for labor.  Another part of the payoff was that I felt like I got to embody “the maker spirit” of “if you can’t open it, you can’t own it” and The Maker Bill of Rights.  Perhaps most importantly, I learned from the experience and will be more comfortable doing out-of-my-comfort-zone repairs in the future.

Now, my main concern is hitting the optimum refrigerator and freezer temperatures. 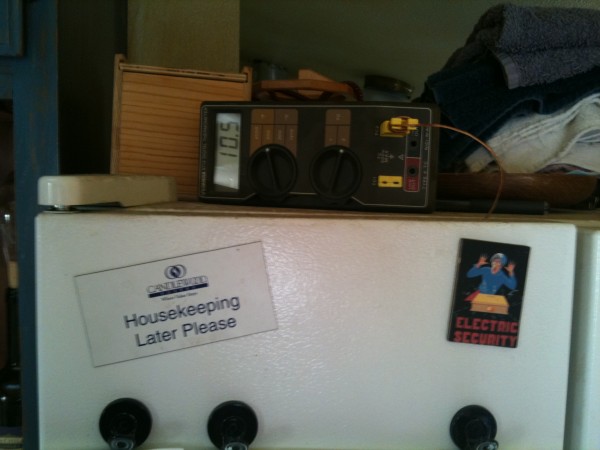