There are a small handful of surprising things I have taken past airport security in recent years. Some of them were knowingly, some of them were forgetfulness.  This is a pictorial chronicle of those items.

One of the first questionable items I managed to get past security was “The Bill of Rights – Security Edition.”  I got this back in 2003 and have been flying with it ever since.  It is a piece of sheet metal, larger than a business card, smaller than a 3×5 card, with the bill of rights printed upon it.  By itself, the corners are sharp and the edges can be a little sharp.  The general form factor reminds of the DefCon badges (was it DefCon 4 or 5?) that were made of metal and which attendees sharpened to a razor point by rubbing the edges against the sidewalk.  I did not do this (to the DefCon badge or the Bill of Rights), but it could be easily done to produce something as sharp as a box-cutter.  Obviously, bringing this past security was deliberate. 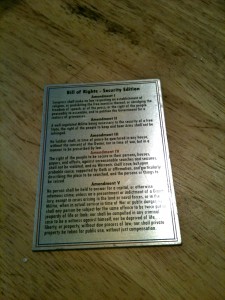 The next questionable item is the bag of 3oz liquids, each repackaged in travel bottles labeled Reagent A, Reagent B, Reagent C, and X.  This was scary enough that I nearly did not do it.  I convinced myself that it was unlikely that the folks on the front-lines of the TSA know anything about high-school chemistry, and yes, that turned out to be the case.  Although they could see the labels, nobody asked what a reagent was or why I was carrying them.  They didn’t even ask me what the liquids were.  (For the record, I believe they were shampoo, conditioner, moisturizer, and spray-in conditioner.)  This leaves me feeling really safe about the competence of airport security. 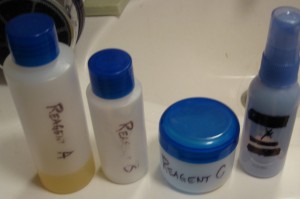 The next item I have managed to get past airport security is my Bomb Defuser.  It is really just a pocket knife that Make Magazine laser-etched.  If I am taking this somewhere, I usually put it in my checked luggage to avoid possibly awkward explanations.  Airport security generally frowns upon references to bombs, even joking ones.  On my most recent trip, I forgot this was attached to my keychain until I was at the TSA checkpoint.  I typically empty my pockets into my carry-on because it is easier and faster than trying to deal with that stuff there than through the metal detector.  The knife went through the X-ray machine in my bag, and nobody seemed to notice. 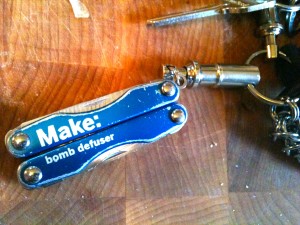 Finally, under similar circumstances, is the corkscrew. During one trip to the coast, Kim and I picked up a bottle of wine to bring back to the hotel room.  We forgot that no corkscrew was available, so had to go back out to get a cheap one.  This is that very one.  Ever since then, I have been carrying it in my bag, removing it for trips.  It had been so long since my last airplane trip that I forgot it was in there.  It went through the X-ray (consequently, at the same time as the Bomb Defuser).  Nobody noticed. 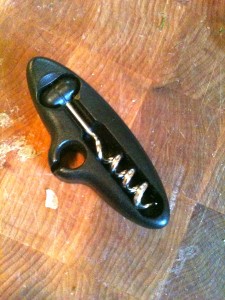 So those have been my TSA experiences. The whole security checkpoint thing just ends up feeling like Security Theater because of things like these.  Nobody in charge stops to think that some of the real dangers are fires and explosions from laptop batteries and iPods, whether accidental or on purpose.

One thought on “The things I have taken past airport security”