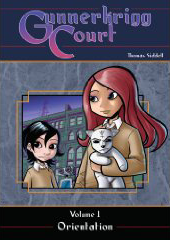 I think I have come to the conclusion that any recommendation by Andrea Phillips is going to be something I like. This conclusion is wildly drawn from exactly two datapoints, but I stand by it for now. Several months back, she mentioned Escape Pod, a podcast of science fiction short stories, and I have been listening ever since. On this most recent ARG Netcast, Gupfee recommended a webcomic-slash-book that Andrea had previously recommended to her.

I had never heard of it, but the comic, Gunnerkrigg Court, has been around long enough to have produced a nice glossy 300 page book of the first 14 chapters. It is somewhat Harry Potter like in that there is a girl who is pretty close to being an orphan living at a boarding school, meeting other kids who parents went to the same school. That is about where the similarity ends, though. It exists on a sort of border between science and magic. The school, school grounds, and people are full of mysteries. Robots, demons, ghosts, and mythical beings are par for the course. It actually caused me to study up on Native American gods(? deities? mythical beings? something? IDontKnowTheProperTerm?) today. To quote the publisher:

“Antimony Carver is a precocious and preternaturally self-possessed young girl starting her first year of school at gloomy Gunnerkrigg Court, a very British boarding school that has robots running around along side body-snatching demons, forest gods, and the odd mythical creature. The opening volume in the series follows Antimony through her orientation year: the people she meets, the strange things that happen, and the things she causes to happen as she and her new friend, Kat, unravel the mysteries of the Court and deal with the everyday adventures of growing up.”

So on Friday, Kim and I wandered over to Powell’s on Hawthorne and I snatched up their last copy of the book. I picked at it a little on Saturday, but really dug into it today on the sun porch with a snuggly cat on my lap. I then proceeded to read the online version from where the book leaves off. Good stuff.

P.S. To add to the discussion on the netcast, I knew that Andrea’s site, Deus Ex Machinatio, was not “Deus Ex Machina”, but I guess I never looked closely at that last word. I always figured it to be a coffee-based pun.