It’s okay to do a recap a week late, right? Last week was Ignite Portland 5, the night of 5 minute talks, each accompanied by twenty 15-second slides. Although I really loved IP2 and 3, I was a little disheartened by IP4. This was for no one specific reason — the organization and timing seemed a little off, and while I greatly enjoyed one or two talks, the remainder had difficulty capturing my interest and attention. IP5, on the other hand, was full of win and has regained my confidence in the whole endeavor.

So last Thursday, I cut out of work early, drove home (ironically, going PAST the Bagdad is the quickest route home), and planned on doubling back on the bus. Some tweets and text messages during travels (I’m a bad driver! Texting while driving!), secured me a ride in with a friend who was passing through my neighborhood. Of course, our timing was off and I had a bit of an embarrassing mixup between SMS and Twitter.  Darn you, iPhone SMS interface! And no thanks to you, @substitute for retweeting! 😛 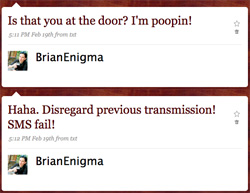 In keeping with the quick nature of Ignite, I’d like to post a sentence or two review on each of the topics.

* The Secret History of Fonts You May Not Know Before – I now know a lot more about font history than I did before (which was, admittedly, almost nothing) — including the origins of Comic Sans and the “grotesque” name I occasionally see on them. I still, embarrassingly, cannot tell Arial from Helvetica.
* The Universe Story – I feel tiny. So tiny.
* Reading the Fine Print: You Gave Yourself Away – All your life are belong to Facebook. Plus, you’re a slideshow cheater! 😉
* If we want to change our environmental impact, forget the cars we need to fix our buildings – I had heard of green buildings before, but didn’t realize the amount of energy that goes into running regular buildings or even that there were levels of green building certification.
* Open, Mobile, and Linux: A basic introduction to Android G1 development – As long as my Apple handcuffs are both golden and fuzzy, it’s all good. I feel bad for not being more into G1, but the iPhone is so shiny.
* Science. It works, bitches. DNA Edition. – Gattaca is here, bitches.
* How to creatively destroy pesky, non-moneymaking community efforts – Fhqwhgads?  Gesundheit.
* Fashion! Music! Intrigue!: Why You Should Be Riding the Bus – I don’t see nearly enough transvestite hookers while eating Doritos on the bus, it would seem.
* How to be a Refugee: Several not-so-easy steps from oppression to resettlement – This talk was a real bummer, but in a good, eye-opening sort of way.
* Not your grandma’s game: Why you should be playing bridge. – Both bridge and cribbage are games I have no idea how to play, but keep telling myself every few years that I’m going to learn. Maybe this time, it will stick.
* Why Publicly Owned Fiber is the Answer to our Broadband Needs – Yes! Broadband needs more transparency in both political and technological ways.
* the basics of writing good shit that people enjoy reading – I feel as though somebody pooped in your typewriter that morning. While I am sure it’s “literally” “ironic” that this is the only talk without capital letters in the title, I didn’t quite understand the anger.
* Ham Radio: It’s not about talking to pork products (but we’re working on that) – I’m probably a little biased, in that Chris was my ride to the venue, but I think this talk made a very geeky and technical subject accessible to all.
* Hacking life with kids, but without a car – I love the sentiment. (I’ve been trying to use the car only for the work commute, myself.) The slides were beautiful. I can see how reading directly off of the slides in a monotone voice might have sounded like a good zen-like plan, but it didn’t really work for me, personally.
* How to know if you are a Narcissist – Holy carp. We’re all narcissists.
* How to kill three chickens in three years – Oh great. Now you’ve given Kim ten more reasons against me getting chickens! Great talk and fun style, though.
* Omelettes: Winners and Losers – Holy carp. I’ve been making omelettes wrong all these years.

Other thoughts on the night:
* It was nice that the advertising slides had a lot of variety, by way of background images. Still, even more background images would have been nice because the repetition is noted after a while. On the other hand, it sure does beat the simple, stark advertising slides from previous years.
* The 15 Seconds of Flame videos are a stroke of genius.
* The Bagdad needs more and/or faster beer lines for the event. Geeks drink beer.

4 thoughts on “My Ignite Portland 5 Recap”