Please note that all blog posts before 8 April 2007 were automatically imported from LiveJournal.  To see the comments and any LiveJournal-specific extras such as polls and user icons, please find the source posting at http://brianenigma.livejournal.com/2005/01/

Do they make dog biscuits for cats? Ebenezer seems to have a thing for hard, crusty, virtually inedible bread–the sort of thing that has about the same density as a Milkbone. It has gotten to the point where I can no longer leave a fresh loaf of bread unattended on the counter. He decides he wants a piece, carries it down onto the floor, then proceeds to rip out the most crispy pieces of crust.

I was going to post a picture of my scary chicken flattener in the previous post, but forgot to. So, here goes (plus the okay, but not nearly perfect, fowl result): 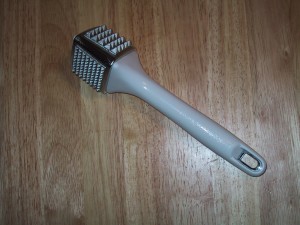 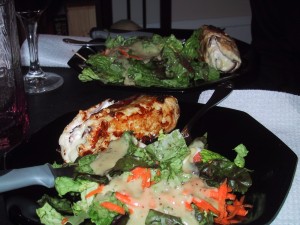 Some might call me a mean, evil, and nasty pirate because I download television shows from teh entarweb. Those people are all employed by the MPAA. My conscious and karma are okay with this because once said television shows appear on DVD, I purchase the DVD. This leads me to the following situation: I have a bunch of season 3 of Alias on computer disc that I no longer need. I should also have seasons 6 & 7 of Buffy and 4 of Angel (but have yet to locate the discs). I bought all of the above on DVD when they first came out and am only now going through the clutter in my office. The discs are mostly DVD-Video with menus and such, but there are also some DVD-ROMs and CDs with raw computer files (AVI, MPEG, and/or QuickTime). If you are local, on my friends list and want them, let me know. They will be going into the shredder next week.

In a related note, I am trying to locate fun and interesting shows that are either currently in production or were on in the past but are not yet available on DVD. Suggestions are not only welcome, but encouraged. The list of current downloads includes:

The new Mac Mini will totally optimize my TV downloading experience, as I will no longer have to do two hours of processing for every hour of video to burn to DVD. I can just watch the Divx files directly on the television. I can also get much more video on a DVD by this method. Now, I just need to code up a nifty menuing interface that will work with the Keyspan remote.