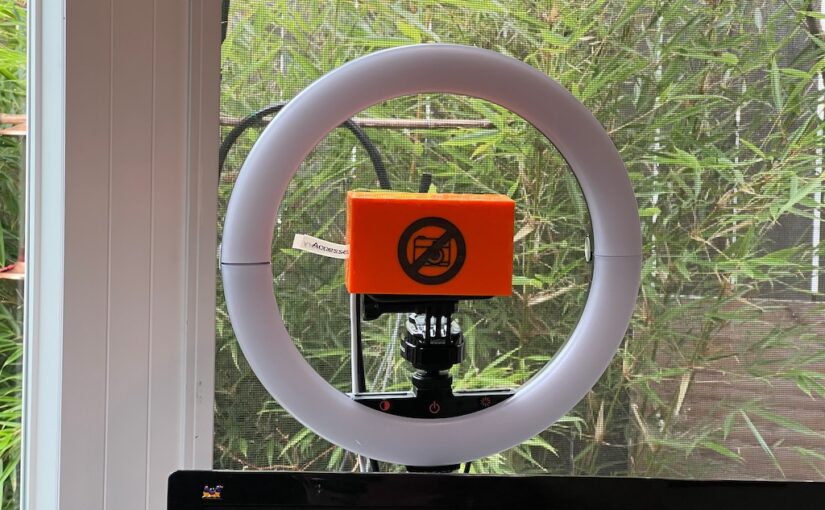 Over the years, I’ve gotten pretty good at eyeballing laser-cutter designs. I’ll always prototype in cardboard. Increasingly often, the prototype and the final versions are one and the same. A number of things start off with a boxes.py parametric box followed by tweaks.

I work from home, from the tiny house in the backyard. Recently, I’m also living there full time — partly for the summertime air conditioning and partly because of ongoing improvement to the main house. Working from home involves a GoPro camera for online meetings, and when I am not “at work,” I get paranoid and throw a cloth bag over it… like a… kidnapping victim? I’m not sure I like that simile. I thought I’d upgrade my camera-cover game. All I need is an open (5-sized) box, but with a gap on the back to accommodate the power and HDMI cables.

The cardboard prototype caught one actual flaw and one aesthetic improvement.

One of the tabs where I’d cut away part of the box didn’t extend out like it should. After placing it on the camera, I thought it would be nice to have a design etched on the front. In this case it’s a circle-slash and the camera emoji from Google’s monochrome Noto Emoji typeface.

Why does the back not quite go down all the way? That’s to make it easier to tip forward and yank off with the light ring in place.

Do you have a GoPro Hero 8, the Media Mod, and want to laser cut a cover? I have an svg for that, set up for 1/8″ acrylic. Feel free to not use orange. The etching works best if you leave the protective paper on as a mask, paint into the etching with acrylic paint, then peel off the paper when it’s dry.

If you don’t already know boxes.py, check it out!

One thought on “Cardboard Prototyping a Laser-Cut Camera Cover”