Sometimes people get a little wacky about fonts — and by wacky, I mean obsessive.  Something that recently bubbled up into my online reading is a particular obsession with the ampersand.  Typographers do not get to use the ampersand all that much and most fonts have incredibly boring ampersands, so when the time comes to use an ampersand, it’s party time.  You generally have to spice things up because of the boring default: use the italic version or borrow one from a totally different font face.  See also: Use the Best Available Ampersand & Open Source Ampersands.  I don’t fault anyone for the whole ampersand thing.  Some of the variations are cool, and geeky obsession is what makes the world go ’round.

Something that recently occurred to me when looking for a particular Unicode character in the Mac character viewer is that there are a whole lot of non-letter “letters” in the Unicode alphabet that have all sorts of fun font variations.  For a good time, take a stroll through the Dingbats section or the Miscellaneous Symbols area.  One of those symbols is Unicode 0x2603, the ever-popular snowman.  Sometimes he wears a hat.  Sometimes that hat is a fez.  Sometimes there are snowflakes falling around him.  To help you best pick out the right snowman for any given job, I thought I would present the default (or default plus whatever apps installed whatever fonts on my machine) Mac snowman variations.

In all honesty, I only found six main variations. There were a lot of entries in the character viewer, but it seems that the regular, bold, and oblique snowman “variants” of any given font end up being exactly the same.  It is possible that there are more variations out there in the world, in fonts that I do not have, but the six I found are as follows: 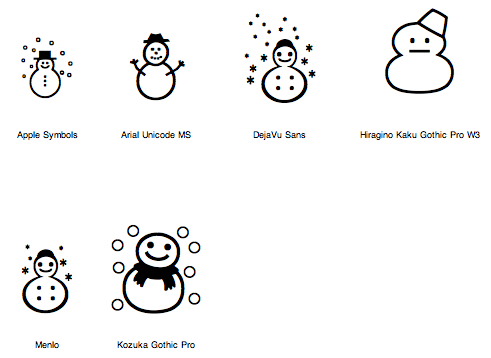 Now remember, kids: use this newfound snowman knowledge only for good.  NEVER for evil! Use the snowman wisely.

4 thoughts on “Use The Best Available Snowman”