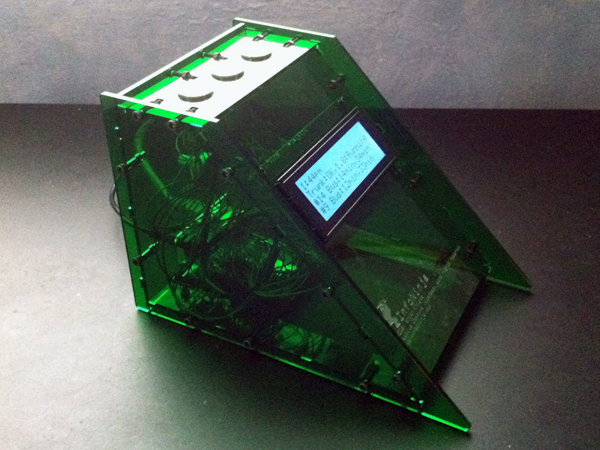 InfoNinja is based around an Arduino Ethernet Uno motherboard.  It has external connections for power and Ethernet.  Internally, it is wired up to an LCD with RGB backlight and three buttons, each with their own light.

The complete hardware design files are in my GitHub repository at https://github.com/BrianEnigma/InfoNinja.  I have attempted to document the parts and build here, in case others would like to follow.

The following is a rudimentary schematic diagram.  I developed the design using Fritzing, though not all the parts I used are available, so I had to fake it.  The three LEDs on the LCD display represent pins 16, 17, and 18 — the red, green, and blue backlight pins.  (The part in Fritzing only has 16 pins and assumes it’s a single-color backlight.) 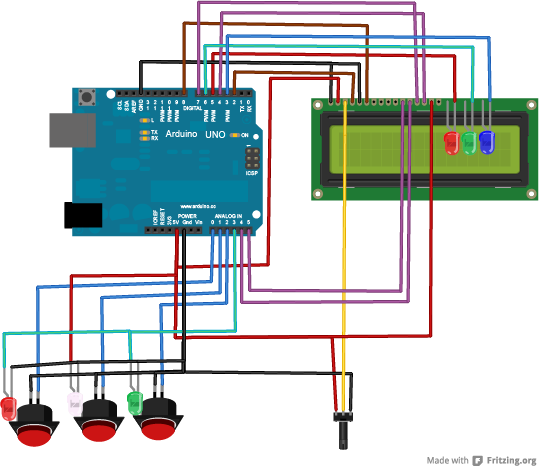 When I built this in my head and bought up parts, I didn’t realize exactly how many pins I had available.  The Arduino Ethernet has fewer pins than the regular Arduino.  Five are used by by the Ethernet.  One does double-duty as to select the SD card — though I decided not to use the card in this design, at least giving me that pin to use.  Because of the limited number of pins, I could not independently wire up the button lights.  I tied the center one to power to act as a power indicator, then tied the two outer ones together to the one remaining pin I had after hooking up the LCD data, LCD backlight, and three button inputs.

I collected the parts up, a few at a time, over a few months.  I didn’t realize the total cost until I made this list.  Here is what I used:

The case is a laser-cut sheet of 1/8″ acrylic.  I picked up an 18″x18″ square at TAP Plastics and cut it out at ADX Portland.  If you use an online service like Ponoko, you may need to refactor it slightly to fit the available materials and laser design requirements (e.g. Ponoko wants black cut lines). 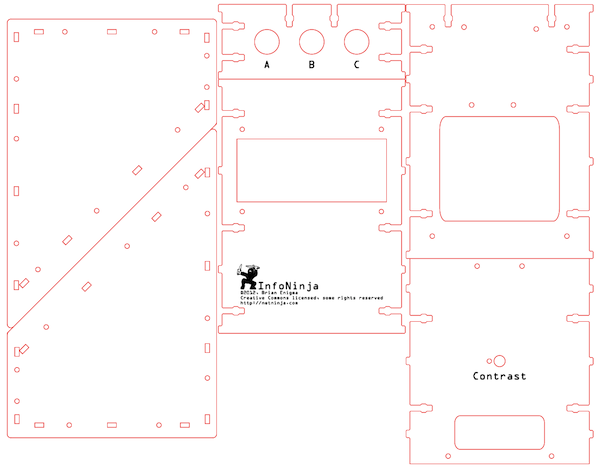 I attached the LCD with smaller M2 metric machine screws and assembled the rest of the case with M3 screws.  You’ll want to solder your connections to the LCD and verify that everything works electrically before attaching the LCD and assembling the case.

Wire up the parts to the Arduino.  I find it’s useful to start out with a male header in each of the Arduino’s female headers.  I then use a different colored paint marker on each one.  This means I can temporarily disconnect my wiring.  When reconnecting, the marking identifies not only the orientation of each header, but the color indicates what plugs into what.  I did not think to snap a photo beforehand, but here’s a blurry photo I made by jamming my cameraphone into the InfoNinja: 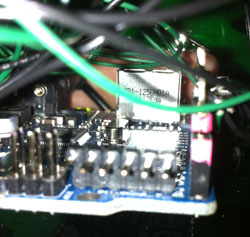 When soldering the buttons, remember that their wires need to route through the holes in the acrylic top.  It is probably best to attach the buttons to the acrylic first, then solder to them so that you do not accidentally get yourself in a position that you need to unsolder.  I mounted my buttons such that the green one is A, the white one (the power indicator) is B, and the red one is C.

Obtain and install the 3rd party webserver library for the Arduino, Webduino

Obtain and install the 3rd party switch debounce library for the Arduino, Bounce, and install it in the same fashion.

Once you think you have everything wired up, it’s time to test.  My GitHub project page has three apps that are useful for this:

Finalizing the Build — Putting the Case Together

Once you have verified that all of the electronics are working correctly, you are ready to button up the whole package.  Attach the LCD to the face using M2 screws.  Be sure to verify the orientation — you don’t want to have to read the LCD upside-down.  The solder pads should be at the top.  I used two M2 nuts behind each screw to provide a little extra locking.  Attach the Arduino the the base, using M3 screws and plastic standoffs.  Because of the hole spacing, there is only one way the Arduino will fit.  With the Arduino Ethernet Uno, one of the holes is obscured by a connector, so you can only use three mounting screws.  You’ll want to use nylon washers between the board and try not to over-tighten because several parts are very close to the mounting holes. 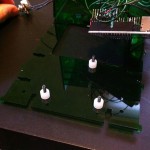 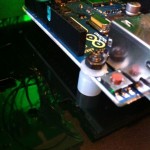 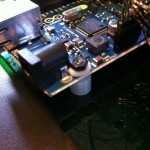 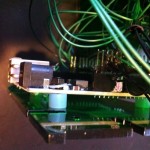 Next, attach the feet. 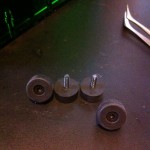 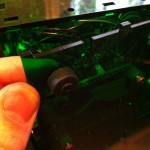 Finally, assemble the box.  The panel attach using a “bolted mortise and tenon joint,” which is how the panels of a Makerbot fit together.  The first few panels are easy to assemble because you can get your fingers on either side of the nut to help secure it in its channel.  As you approach the end, it’s a little more difficult.  You can still do it, but if you have tweezers, reverse tweezers, or forceps, it might make the job a little easier. 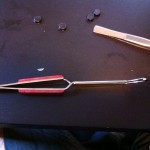 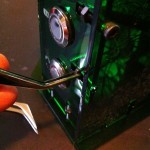 The large hole on the bottom face gives you access to the TTL serial port used for programming.  You can (re-)upload any of the test firmware or upload the release firmware.  If you make modifications to the release firmware (and please share with the world if you do!), you can also easily upload it. 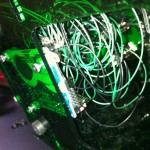 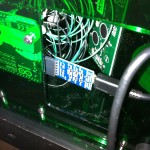 You will want to upload the release firmware into the Arduino.  Connect it to network and power.  Look at the LCD and note the InfoNinja’s IP address.  If it reads 0.0.0.0, then it was unable to obtain an IP address.  Perhaps your network doesn’t use a DHCP server and has only static IP addresses (setting up a DHCP server is beyond the scope of this text, but most routers and cablemodems do that these days).  It is also possible that you plugged in power before network and the DHCP request timed out before you connected it to the network.  Load up test_page.html from the git repository, type in the address, and try a few of the links.  This will issue requests to your InfoNinja’s web server and will let you manually set text, change colors, set blink modes, and so on.

At this point, if everything looks good, you are probably ready to continue to desktop software.

You can use a regular Arduino Uno plus an Ethernet shield instead of the Arduino with the built-in Ethernet, but you will have to expand the cut-out hole in the back to give you access to the Ethernet jack.

You can probably use a WiFi Ethernet shield without a problem, as long as the pins used and API are the same.

If you’re on a budget, you can use the USB port on a regular (non-Ethernet) Arduino to talk to InfoNinja, but you will need to make some large changes to the firmware.  Essentially, you will need to rip out the web server and replace it with a serial protocol of your own devising.  The advantage of this is that the pins that are usually used up by the Ethernet controller will be free.  You can not only have the two side-buttons on separate GPIOs, but you can hook them up to PWM pins for fancy fades.

In the next firmware revision, there are a couple of changes I would like to make.

I would like to use the red “demo mode” button for paging.  This would allow multiples of 4 lines, with that button toggling between them.  For instance, you might put environmental information on the first page (current temperature, weather forecast, moon phase), transit information on the second page, and build-server information on a third page.

I would also like to add security.  Currently, InfoNinja prints whatever it receives.  This is good if you are on a small, trusted, network.  A larger network could have people accidentally or intentionally sending updates to your InfoNinja.  There is placeholder code in there to create a whitelist of one IP address: the first IP address that communicates to InfoNinja will be the only one it allows updates from until you cycle power.  Unfortunately, this placeholder code is useless without some core Arduino updates.  Internally, the Ethernet subsystem knows what IP address it is talking to, but it does not expose this value to user code.  The core Arduino library would need to be patched to expose the IP address, and then the Webduino library would need a patch to pass it along to the user application.  This is not hard to do, but I’m not sure I want to monkeypatch the core Arduino libraries.  Each system update would require me to re-monkeypatch them again.

If I were to do this again…

If I were to do this again, I might consider Adafruit’s new I2C-driven LCD board.  This would chew up fewer pins on the Arduino, allowing not only for the two buttons to have separate lights, but they could be hooked up to PWM lines for slick fade action.  The one drawback to the I2C board is that it rules out the cool backlight effects like blinking or fading between two shades of the same color.  This new board gives you primary colors only.  You could blink between red and black or red and white, but you cannot blink between a bright and dim red.  This is a tradeoff I would have to ponder.