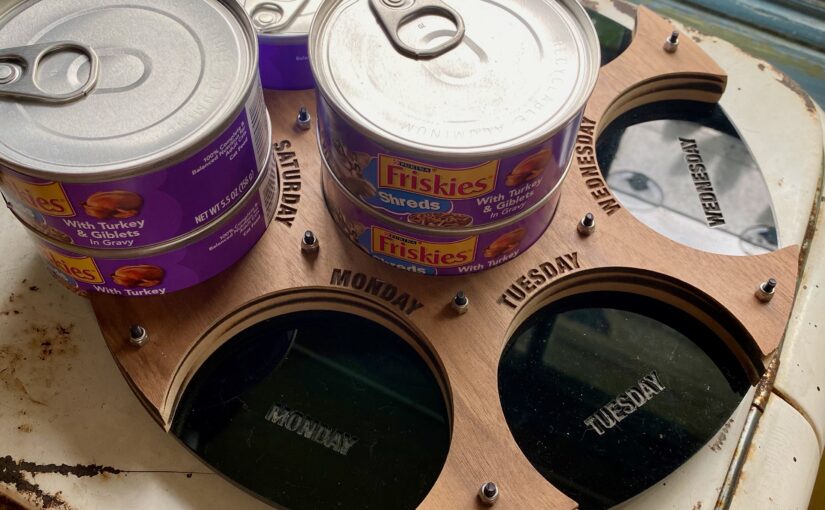 In these pandemic days of time losing meaning, with days sliding into one another, and difficulty keeping schedules, Christine and I ran into a few snags in the chores. We feed the cats twice a day, a can each time, two cans a day. When you start with a flat of 24 cans, that’s a column of two cans per day. There’s never a single can left over. Except when there is. Because the cats would get fed twice for a given meal on occasion.

I got to thinking of ways to solve this. The immediate thought was a magnet board, sort of like a chore wheel, sort of like the dishwasher magnet that tells you if the contents are clean or dirty. I have that dishwasher magnet. It never gets set correctly. I had low hopes of being able to keep one for cat food up to date.

The next thought was to, instead of using magnets as avatars for the cans, use the actual cans themselves. I had a mental image of those wire soda can dispensers. I toyed with trying to create something cat-food-can-sized out of wire or using laser-cut pieces. There would be marks along the edge to show quantities (effectively, whether cats had been fed that meal). I couldn’t come up with a good design that wasn’t bulky and also worked well to visualize whether the cats had been fed that meal.

My next thought was to give up on the cool kinetic movement of cans sliding around. I’d just use position to signify. That both simplified the design and made the fed/not-fed visualization much more clear. I pulled out my calipers, measured a can, and came up with a workable new design.

The configuration is four layers: an acrylic base, thick unfinished center slices sandwiched in the middle, and a top layer made of nice wood. They’re fastened together with 3mm screws that hold non-slip rubber feet on one end and lock-nuts on the other.

The design was great, but it had a few dimensional flaws. First, I had measured a single can, and it turns out they have a lot of manufacturing variance. Even though the design accounted for a millimeter or two of tolerance, that wasn’t enough for actual differences between cans as well as denting. Second, the ¼” wood I used for the center layers was a bit warped, so the can holes cut kind of funky and stuck out a bit when everything bolted together. Both of these things conspired against me. The cans wouldn’t fit. I ended up doing a lot of manual sanding to straighten out and widen the openings.

Overall, despite a few design flaws, I’m happy with the results. And I better know what day of the week it is and whether cats have been fed.