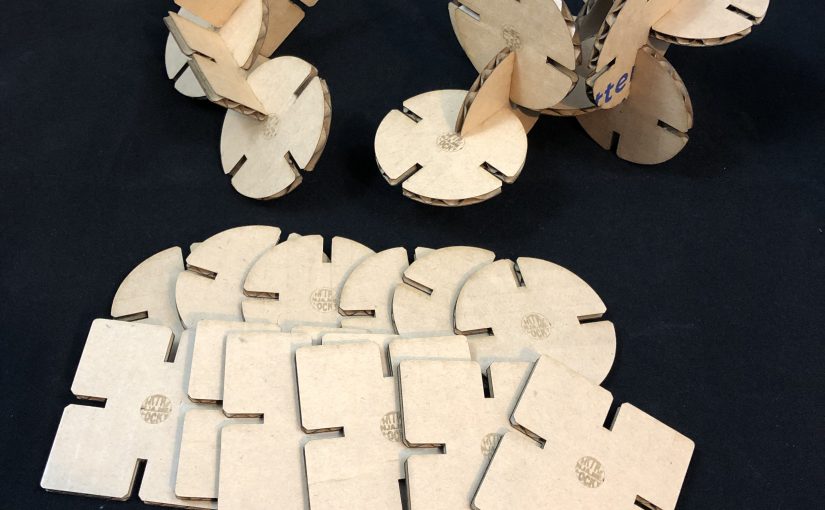 About a year ago, I learned that I could load a 3D model into Fusion 360, and it can calculate all the slices necessary to turn it into a laser-cut cardboard (or wood or acrylic or whatever) project.

They’re quick to cut out of scrap cardboard, and they’re fun to fidget with and throw around. (One thing they aren’t good at, though, is dog toys. As much as dogs like the shape, one can just chomp right down and destroy one. It’s no tennis ball.)

I left a few sprinkled around the break areas work. A few got reassembled in interesting ways. This one is a sort of hourglass shape. I never snapped a photo, but once there were several combined into a car-like shape.

This got me thinking. The single-purpose cardboard ball pieces got used as a construction toy. Maybe I could just make a similar purpose-built set of construction pieces? A flat-Lego that can build 3D shapes?

I’m pretty sure that the design I came up with isn’t actually original — that I’ve previously seen it as a child or adult. But the implementation, size, and other details are mine. The single-size shapes are 60mm across, with slots that leave a 10mm gap in the center. The double-width rectangle is the same size as two squares hooked together (with that 10mm gap between), namely 130mm across.

The design files are up on Thingiverse as Locky, the Laser-Cut Tile Construction Set.

I’ve deposited them in the office break rooms and folks have already build some interesting shapes with them — one incorporating the cardboard balls.

I’m interested in making more shapes, and have two specific shapes in mind, but have some concerns. I’d like to do diagonals — on the 45º of the squares and/or circles. But I’m not sure the best depth to use. I could keep them the same depth, so that the pieces slot in at the same distance, with the same amount sticking out. But that could affect alignment. Remember, if we have a right triangle and the two sides are the same, the hypotenuse is going to be a bit longer. So a grid of squares, with squares (or circles, for that matter) on the diagonals aren’t going to quite reach the diagonal neighbors. I could keep them more shallow, to accommodate the hypotenuse connections, but then if you really did want to do a radial starburst of equal depth/distance, that wouldn’t work.

The other shape I’m thinking of is a “roof.” This would be a rectangle, with hinged folds. Sets of squares “one square away” from each other would make a nice gabled A-frame roof. And two-away would make a perfectly flat roof. Or base, if you wanted it to be a base.

So I’m still thinking of ways to expand the shapes. If you have thoughts, please share!