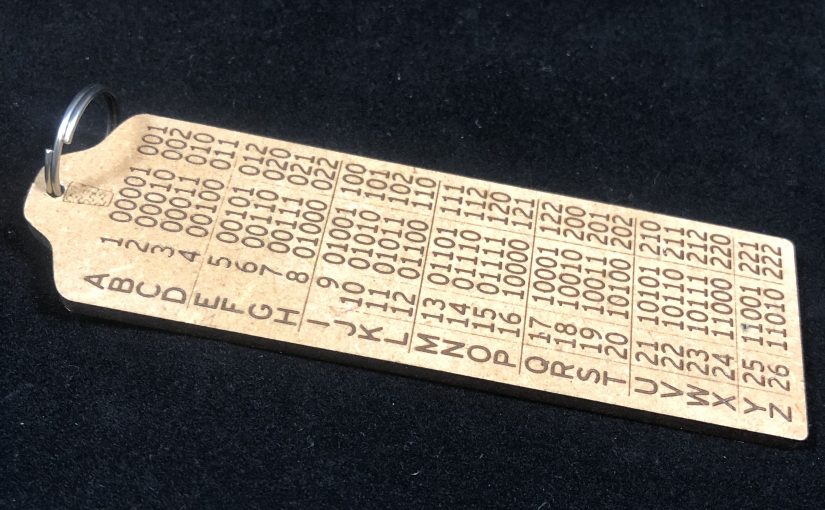 The last couple of years, I’ve made little Christmas gifts for my fellow Portland Puzzled Pint organizers. Last year, it was themed coasters. This year, I thought I’d make “code sheet” keychains. Or zipper pulls. Or lanyards. Or whatever the hip kids are calling them these days.

It took a couple of design revisions to come up with a shape and size I was moderately happy with. One side has the more numeric-leaning codes and the other has the more symbolic codes.

A few minor notes of interest:

I laser cut the two-sided keychains, then finished them with clear acrylic spray. The cutting itself took about 30 minutes per side to etch all the text — but it was 30 unattended minutes. It’s not like I was slaving over a hot laser cutter to make it happen.

The final result is… adequate, if I’m going to be honest with myself. The numbers side turned out great! Big, bold, beautiful type! The symbols side isn’t as legible as I’d really like. I think that over time, with wear, it will become more of a conversation piece than an actual useful code sheet.

The Morse code looks great. Moving over a column to the braille, it’s fairly light. I went with the Apple system font for Braille — well, one of the four Apple system fonts — and it’s just a bit too light. I appreciate the open circles for the “missing” dots. When packed in a column like that, it’s a little difficult to tell if a dot is in the top, middle, or lower row. But both the dots and the circles are too light. If I were to do this again, I’d come up with a vector that stretches them out to be more of a grid of squares, like so:

I think this would stand out significantly more with the grid squares. The next column over, the semaphore, could stand to have some bolder lines, perhaps a little bit longer. The pigpen mostly works, but could also benefit from thicker lines, like the semaphore.

Will there be a 2.0 keychain? Maybe someday, but for now I have plenty of other laser projects to occupy myself with.