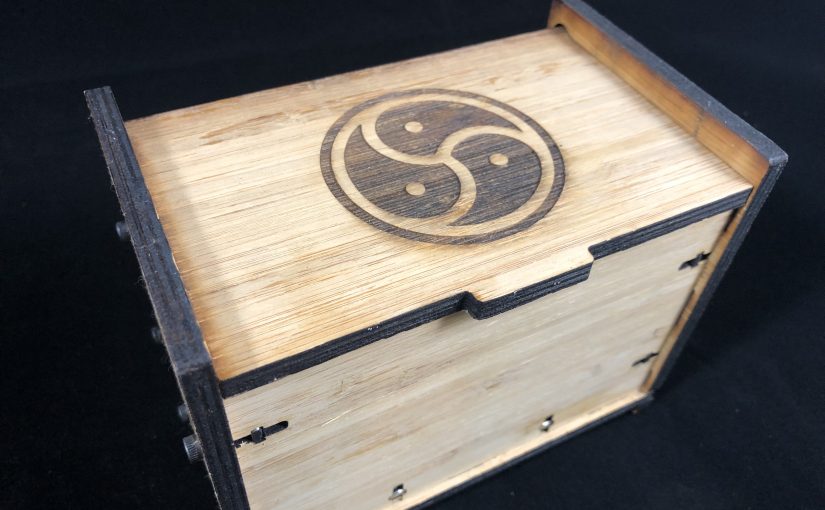 About ten years ago — at a Container Store of all places — I found the most amazing little wooden box. It wasn’t fancy or decorative or ornamental. It didn’t have any special features or hidden compartments. It was a simple flip-top wooden box, described as “a recipe box.” At the time, I lived my life by Hipster PDA Templates, and this box was perfectly sized for 3×5 index cards. I’ve since looked for similar boxes, but always came up short. Most boxes of that style are for 4×6 cards, which are “recipe card” sized index cards. Or the box is plastic. Or it’s cheaply made. Or it doesn’t have a lid. I never found an equivalent index card box. So I made one. Actually, I made several.

The general idea had been kicking around in my head for a couple of years, but I didn’t commit it to paper until last August. It takes heavy advantage of captive nut mortise and tenon joints — a more industrial-looking building method I’ve used in several projects and could copy/paste shapes from.

Imposing an artificial deadline really does help push you into motion, doesn’t it? I thought it would be a fun challenge to build a box for a friend’s birthday. She’s huge into the Zelda franchise, so I thought I could etch the Triforce coat of arms into the lid. I sketched out some basic designs.

I sent my vector file to Ponoko, and $50 & a week or two later, I had the parts, ready to assemble.

This first version was good, but revealed a few flaws in my design. I picked 3mm (~⅛”) wood because I’ve used that in projects before and it’s been fine. Those projects used more internal supports and mounts for circuit boards, buttons, and so on. As a largely mostly-open box, it felt a little flimsy. Second, I hadn’t thought about stresses on the lid when it’s fully open. When closed, it’s fine, but the design only allowed the lid to swing 180°, causing a little more force than I’d like on the axle holding the lid to the box — which was already feeling a little flimsy due to the thickness of the wood. But despite a couple of small flaws, it was a nice little box.

Two months later, my Glowforge arrived. Having a laser cutter in the basement immensely helped on iterating the design! I reworked it a bit for ¼” bamboo plywood from Inventables, giving it a lot more sturdiness. I pushed the top hinge back and extended the length of the lid so that it could comfortable flip all the way backward (270°), without stressing any parts. This was a significantly improved design! I don’t have the same level of enthusiasm for the world of Zelda as my friend, so I decided to etch some mandalas on top.

Surprisingly, the problem I ran into with this design wasn’t a design problem, but a manufacturing hitch. Wood from other sources typically includes a layer sticky-backed protective paper. This is to protect the wood’s nice surface from char and smoke during the cutting process. I made a reasonable facsimile of this using thick strips of masking tape. Masking tape is thin, and the laser cuts right through it.

Cuts. The keyword there is “cuts.” When it comes to etching designs, the thickness of the tape starts to matter. And I had always just put strips of tape on the wood, without thinking too much about overlap. But overlap is what I had. Sections that are two-thicknesses of tape ended up etching much more lightly than sections that only had one thickness of masking tape. This left some shadowy stripes in the first mandala design. 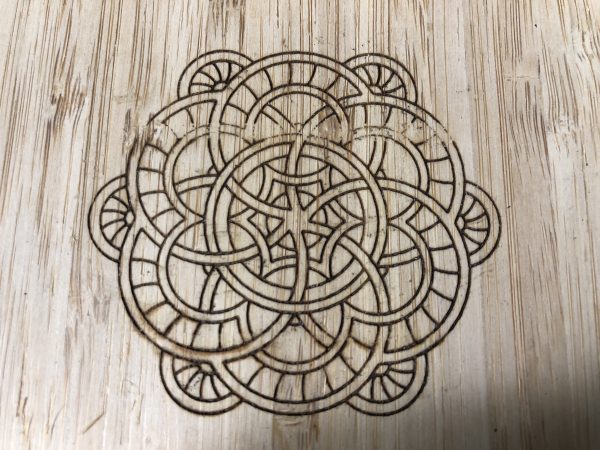 I’ve now updated my method of applying masking tape to the wood’s surface to prevent these sorts of problems with etching designs.

I haven’t yet published my vector files. I’m trying to figure out my best path ahead for that — free, Creative Commons, sell the files, sell the product? No idea yet. But soon. 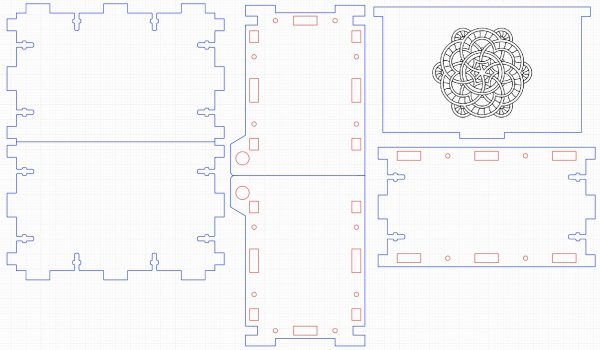