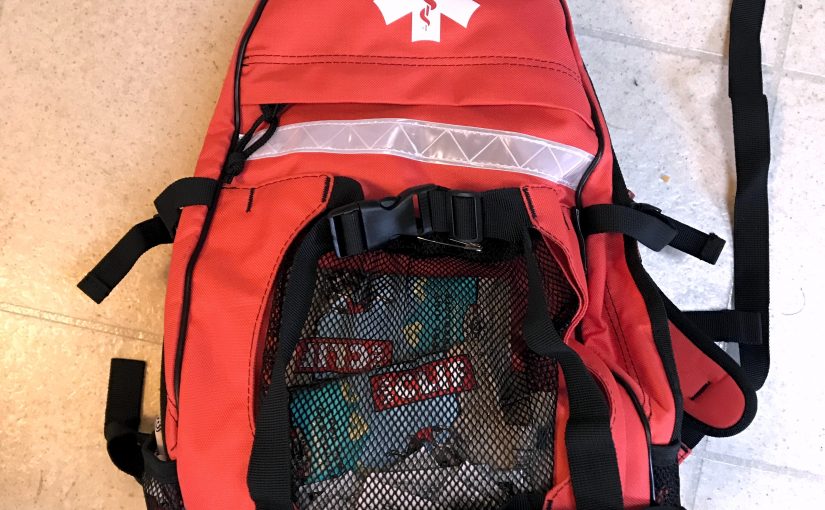 I’ve always enjoyed articles that interview folks from different walks of life that cover “what’s in your bag?” and “everyday carry” topics. You get to see a little glimpse of that person’s life, their personality. On rare occasions, I’d find something clever to incorporate into my life. But I always avoided writing one for myself. Until recently, when I decided to downsize what I carry around, that list would have included a high-end Mac laptop, iPad, iPhone, and Kindle. That felt like a “please mug me” list. In downsizing to a pool of extremely small bags, I always leave the laptop at home and only bring things like the iPad if I know I’ll need it that day.

Given the recent political state, we’ve had a number of protests and marches in Portland. Although I don’t mind the marches, I’m feeling a little old to be in the middle of protesting. Maybe that will change if the world gets bad enough, but for now I feel too self-conscious to be yelling and screaming and carrying signs. After work or running errands, I usually at least watch the protests from a distance for a little while. A few weeks ago, Zoe Quinn (whom you may know as the unfortunate ground zero victim of GamerGate) wrote a little tweetstorm that helped me rethink my protest strategy: 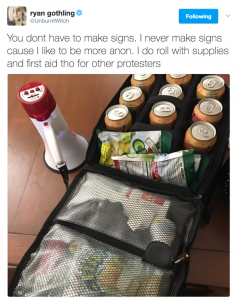 Even in my day-to-day life, I tend to be pretty well prepared: a USB battery or two, one of each type of charge cable, energy bars, ibuprofen, and so on. I have first aid training and (well… expired…) CPR training. I figured I’d put together a protest go-bag.

I started with what is effectively a repurposed EMT bag. It’s bright orange with reflective stripes. Like, really bright orange. For better or for worse, for white-dude-privilege or otherwise, I’m a little less concerned about anonymity than Zoe. The bag has a large cargo area, lots of easy-access pockets on the inside, and a few on the outside. 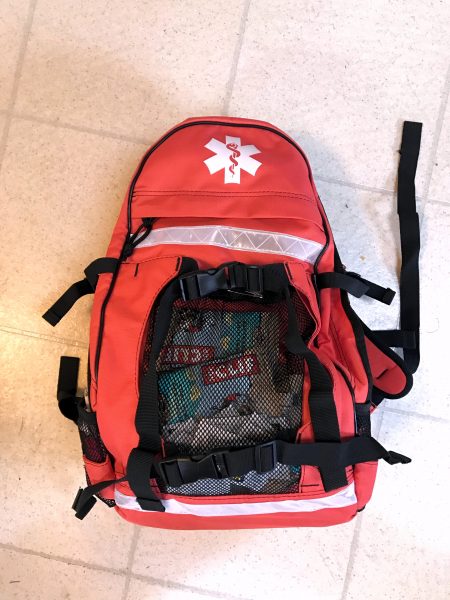 Inside that large mesh pocket are some Clif Bars (chocolate mint — the only tolerable kind) and some single-serving Advil packs. 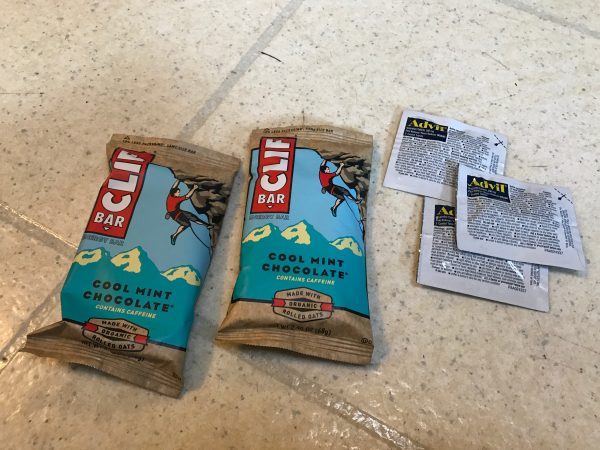 Inside, I have some permanent pens, safety pins, and a stick of chalk (in a nerdy math-teacher holder because that’s how I roll). The Sharpies are good for signs as well as the body (for example, writing the phone number of the local chapter of the National Lawyers Guild). The chalk is good for leaving temporary messages in the environment — warnings, arrows, and so on. 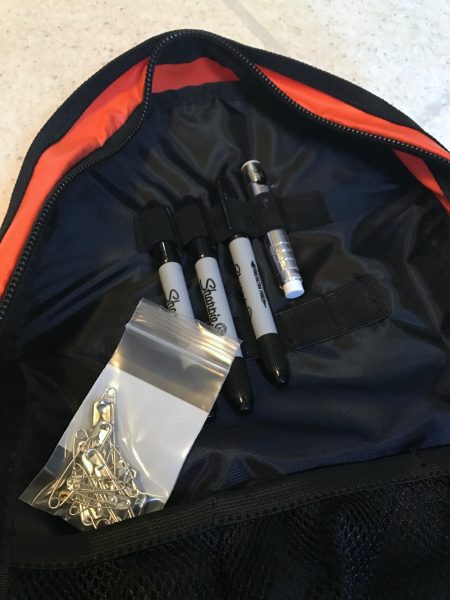 There’s a first aid kit inside that’s quick to grab and some blister packs for sore feet. The first aid kit isn’t the most extensive in the world — the protests aren’t going to be in the middle of the wilderness, days from emergency services. It just needs to be enough to tide things over until emergency services can arrive, or to help folks who don’t feel they need to escalate to the ER. 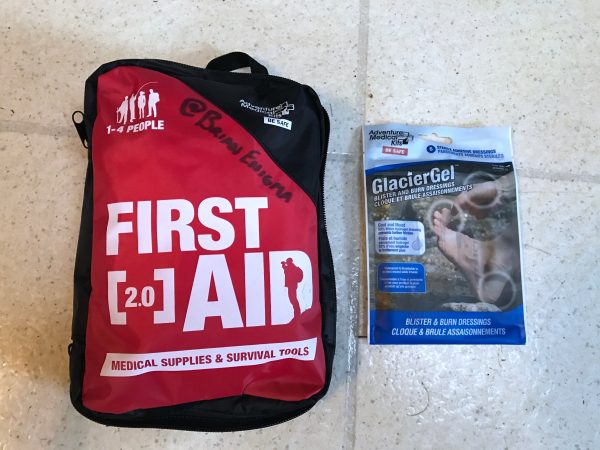 One of the outside pockets holds bandanas. I’m not going as far as having vinegar or milk of magnesia to soak anything in, but I grabbed a cheap 12-pack. If someone needs a bandana, for anonymity or chemical-gas reasons, I have some to spare. 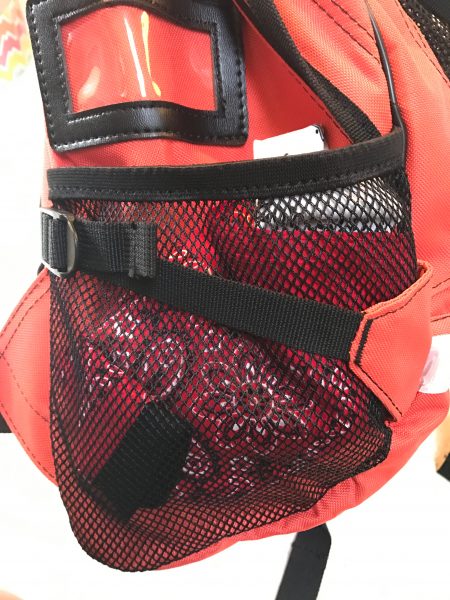 On the power front, I have a high-capacity USB battery with several ports, a USB AC adapter, 10′ micro-USB cables, 10′ iPhone Lightning cables, and some AC outlet splitters. Different combinations of the above let me share power as well as recharge the battery itself.

The bottom of the bag has a grid, typically for bandages and the like, but is sized well for cans of soda water. There are 6 LaCroix down there, by far the heaviest part of the bag.

Finally, something I’ve taken to attaching to whatever bag I happen to be using at the moment, is a camera clip. It’s (somewhat) easy to remove, with a lot of thumbscrew action, but once attached is quite secure. Because it’s meant for extreme sports, a “quick release” camera shoe takes three steps (including another thumbscrew) to fully detach. Once everything’s buttoned down, it’s anchored extremely well. 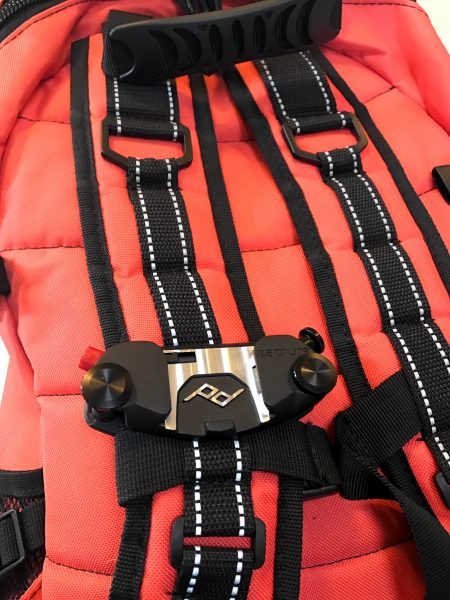 I have a little GoPro Session camera. It’s an older model, but has decent resolution and framerate (up to 1080p60), a wide-angle mode, and is decent in low light. The camera snaps into the shoe, effectively giving me a bodycam. My hope is that that’s just frivolous tech — that I’ll never have to use it for anything. But if something big and bad were to go down, I’d be recording. 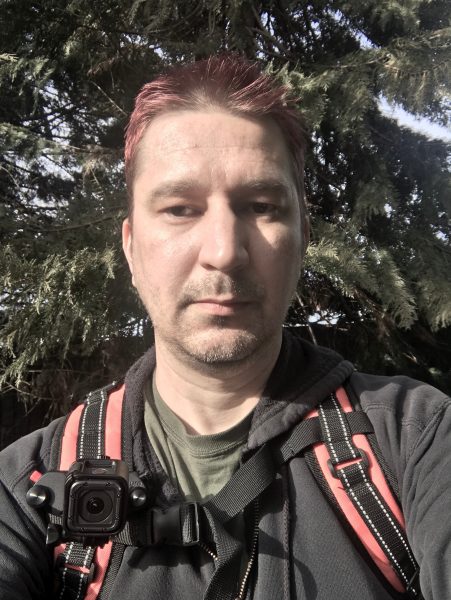 Ultimately, I still feel too old to be in the middle of protesting, but I do feel that I can be useful to the causes by taking a support role from the side. I hope you take some inspiration from this and find your own way to protest.