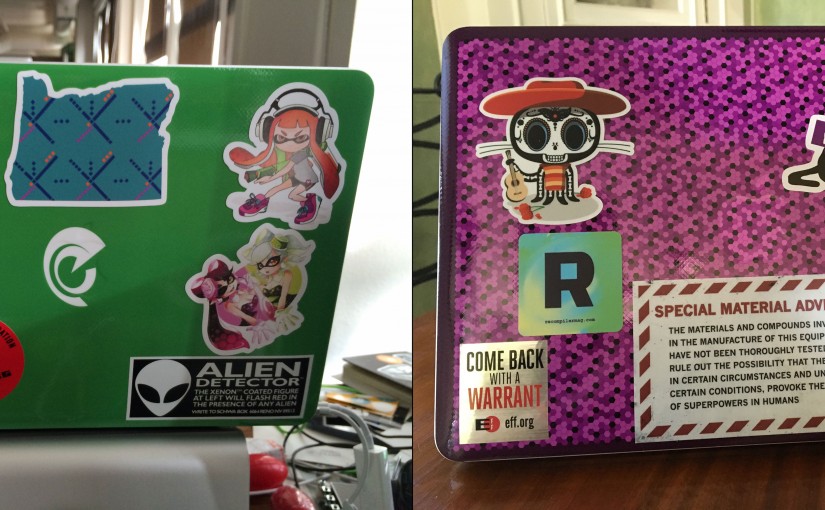 Recently I found myself in the position to say “my laptop, well, my other laptop.” You see, at work I shifted around my development environment. I write embedded Linux code, I’ve worked at a Linux desktop for the past few jobs — for over a decade. My personal laptop has been a Mac for as long as I can remember. (I lie. It has been since the Apple “switch” advertising campaign, when I got frustrated with Linux printer and scanner and WiFi drivers and tried out one of those desk-lamp style iMacs.) Every once in a while I take a work-from-home day and realized that there is a significant amount work I can do from my Mac. The web folks I work with all use Macs as their primary computer, and a few of the C/C++ Linux developers use it as a window into their Linux boxes. I figured it was time to give it a shot.

For a long time I had a typewriter laptop cling on my personal laptop. Before that, I had a Magritte decal. Both disappeared because of AppleCare service. I’m not necessarily sad about that — it’s hard to argue with a free screen repair (especially if one of those screens had pinprick holes with stuck pixels because of kitten teeth), and it’s sometimes nice to start fresh. I hadn’t yet gotten a cling after the most recent repair.

I found myself with two laptops that, externally, looked exactly the same. It was time to do something about that — and not just a small decal or two, but two entirely different clings.

One thing I missed out on with the typewriter cling was stickering. I’m always getting new and interesting stickers, whether from tech culture or pop culture. They work well on/in my Moleskine notebook, but just don’t visually fit on top of the typewriter photo. I decided that any new laptop cling should have a field of solid color or pattern, giving a canvas on which to stick smaller stickers.

The office laptop design was a no-brainer. Company logo. Company colors. Make the logo roughly the same size as the light-up Apple logo. Leave the rest unadorned and ready for stickers. I created a design, uploaded it to Nuvango, and received it a week later. (As an aside, I can never remember that company’s name. I always have to google their former name, Gelaskins, and go from there. They used to exclusively sell phone and laptop clings, but have moved on to clothing, confining clings to a small category on the site.) After adding a few stickers, I think it turned out well:

My personal laptop was a little more difficult to decide upon. I help put together Puzzled Pint every month, so though I might just go with a repeating pattern, redundantly encoding a word or phrase. The result was… not exactly what I’d hoped for. There are two layers to the puzzle: a primer to tell you how to decode the next step, and the final step itself. That first step tested okay and looks decent in the original artwork, but got lost in the print due to color and resolution. You can still kind of see it in the sticker, with a magnifying glass, but you won’t see it in the photo of the sticker. It also turned out a little more Pepto-Bismol-pink than the purple I’d envisioned. And finally, the “answer” (or, at least, the encoded message) probably isn’t satisfying to the casual puzzler. But still, I embraced it and use it to mark my personal laptop.

The Nuvango skins feel a little spendy at $30, but given that you can pick from their gallery of art or supply your own, and that they last years, I feel that they are worth the price.
Posted in: