There is a relatively new feminist hacker magazine out called The Recompiler. The first issue is out, with a second on the way. It’s a great magazine that I highly recommend.

I bought a subscription before the magazine even existed. I suppose I could invoke some sort of hipsterism and say that last sentence in a condescending voice: “It’s a feminist hacker magazine. You probably haven’t heard of it. I subscribed before it even existed, man!” But it’s an all-inclusive magazine, so that kind of arrogant hipster thinking isn’t appropriate.

As I was saying, I subscribed during the Indiegogo campaign. I know the editor — a former coworker — and trusted that she’d find great content. She has a strong track record in organizing events, Open Source, and being a model citizen of the Portland tech scene. She’s someone we can all aspire to be like. Magazine unseen, I subscribed to the digital edition.

I was a little wary of the print edition. The Indiegogo video featured a placeholder: 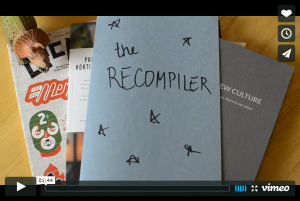 This gave me the preconceived impression that this would be a ‘zine in the most classic sense. I have fond memories of going to the local Tower Records and browsing the ‘zine rack — all photocopied and hand stapled. I do enjoy reading magazines in print, and this this felt like the sort of subject matter I could loan out to friends, but I hesitated at the price. I wasn’t ready to commit to an expensive year in print for a magazine with still-nebulous article quality, print quality, size, and subject matter. I’d also heard it was a magazine mostly for beginners, which also pushed me away from the print expense.

Issue 1 came out, but I never found time to read the digital version. (This is why I tend to prefer dead-tree versions of magazines.) Instead, I learned that there were a few extra print copies available. You could buy just the single issue, without committing to a full year. So I did. And WOW, is it high quality, inside and out. Back in the day, my idea of a top-tier indie ‘zine was 2600 Magazine. It featured a full-color glossy cover and black-and-white rough paper inside. The Recompiler has the same nice glossy cover:

But on top of that, it has a 60-page full-color glossy interior! It has great typesetting, separating body text from code by font and color. It has full-color photos. It features fun illustrations and a smart graphic design. And this is in addition to the great articles.

And my worry that it’s a magazine for beginners? It was only somewhat founded. The tech articles (at least in this first issue) covered topics I already knew well, but then, I’ve been in the industry for mumblemumble decades. I had not taken into account that there would be non-technical articles — human interest, community, and (for lack of a better word) lifehacking. 80s Child by Kerstin Kollmann was a peek into the past and a trip down my own memory lane. Playing Sysadmin for my Activist Mates by Brianna Laughter reinforced a policy I’ve informally followed, with solid anecdotes and useful pointers. Every Day Carry by Meli Lewis had some handy information and helped change my own behavior.

In summary, this is a magazine I’d recommend to folks in the tech industry, no matter how far along their career path. There will be useful stuff. I would also recommend it to anyone just starting to dabble in tech, as it’s primed to touch a wide variety of subjects. Perhaps not every article will be for you, but you’ll get a good sampling to decide what angles of tech you’re interested in. There’s something in here for everyone. Go subscribe.