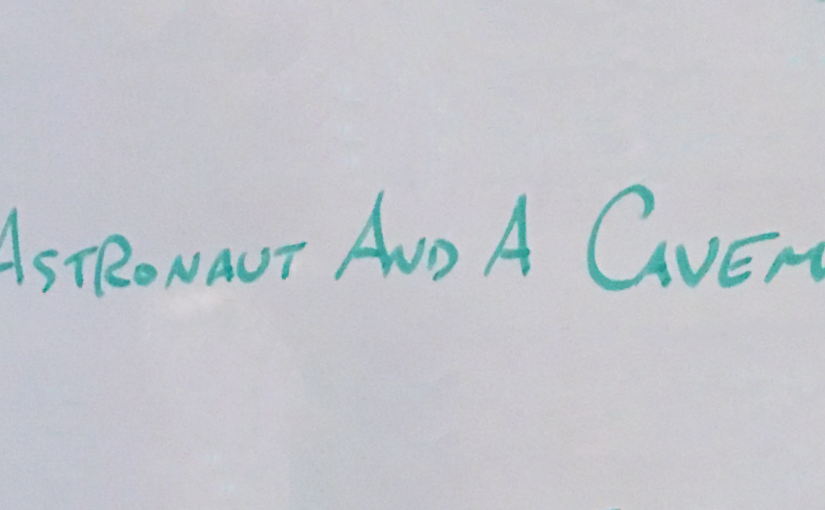 At work, we have a whiteboard in the kitchen. Previously, it was used for kitchen requests. Are we running low on something? Write it on the whiteboard. More recently, those sorts of requests seem to be automatically taken care of by little cobblers’ elves that inventory the kitchen stocks and automatically order supplies. The whiteboard, consequently, had turned into a communal writing space. Frequently there are kitchen requests for office kittens or gluten-free gluten. Occasionally I like to post random paradoxical statements or hypothetical questions. “This sentence is false.” “In a battle between the Millennium Falcon and The USS Enterprise [Next Generation], which would win?” That sort of thing.

Earlier this week, I remembered a hypothetical — in fact, one that I my have asked years ago on the very same whiteboard. I think I first heard it on an episode of Angel.

In a hand-to-hand fight between an astronaut and a caveman, who would win?

For me, this brings about silly mental imagery of Captain Kirk fighting The Gorn. The scenario is further clarified by being on Earth (or, at the very least, in Earth-like gravity) and no weapons beyond what can be found in the environment nearby. 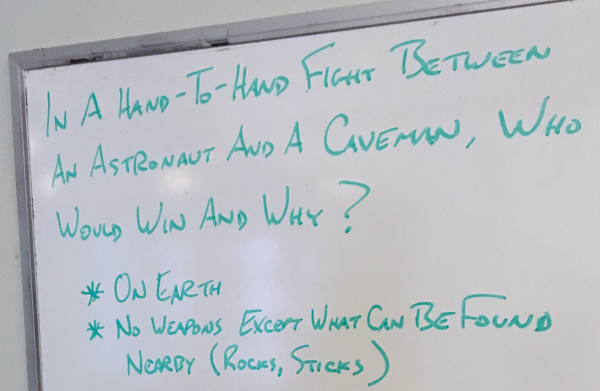 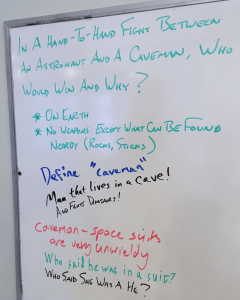 That’s when the unconscious sexism hit. The response to that last assumption-buster really drips with the Gamergate and #notallmen and “Actually…” phrasing. It’s technically correct, but totally misses the point. And perhaps a little insensitive. Statistics! Now, truth be told, I’ve been known to use the phrase “technically correct is the best kind of correct” in pedantic nerd arguments, but using it here feels a little mean-spirited and cold.

Fortunately, a coworker called this person on their assumption. As a result, we had a pretty good discussion about it in our #diversity Slack channel.

I just hope that next time, people think about their public responses and how they may affect others before writing them.

On a lighter note, apparently there was an “I Love Lucy”-style incident with the dishwasher the other day. I totally missed out on that.