I picked up some laboratory glassware, specifically for kitchen use, the other week. It’s all borosilicate, so it’s effectively the same as Pyrex. Some of it will get used for drinking glasses but one item I picked up was a graduated cylinder. My plan is to use it for mixed drinks. With a cocktail jigger, it is easy to measure out 1 or 2 ounces. But with a strong ingredient like celery juice, 1oz may already be too much. Accurately experimenting with small variances in volume felt like the right way to go.

I did some math and found that 2oz ≈ 59mL. A 100mL cylinder should work well. I ordered, it showed up, and I started to doubt my math. Or my ability to order the correct cylinder. That doesn’t look quite right. I double-checked the markings. Yep, it’s the right size cylinder. 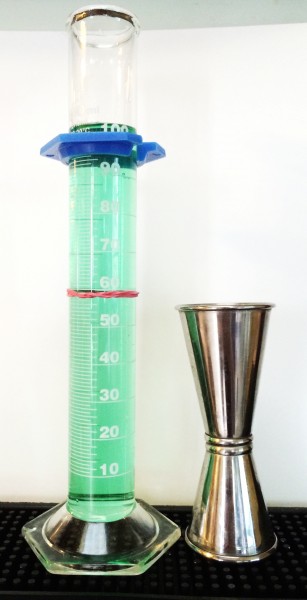 In this picture, the cylinder is filled with colored liquid for better contrast and there is a rubber band at the 59mL mark. Next to the cylinder is my measuring jigger: 2oz up top, 1oz down below. Even taking into account that the jigger is a misleading-to-estimate cone whose open end is a little wider than the cylinder, it feels like 59mL is way too much. Like maybe 30 would be more accurate.

I double-checked my math, asked Google and Wolfram Alpha, and it all worked out. 2oz = 59.15mL.

Of course, I then went the other direction: I filled the jigger and dumped it into the cylinder. That’s when things became a bit more clear. 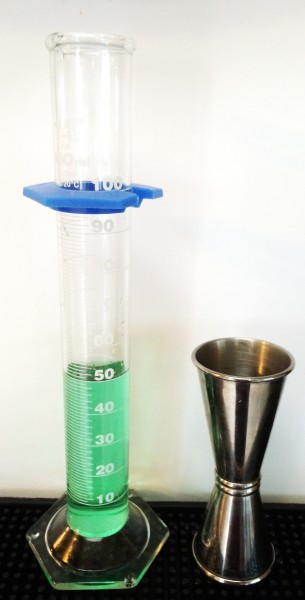 2oz as 60 milliliters feels more accurate, but now I’m left to discover that the unmarked jigger that I previously assumed was 2oz was really 50mL or 1.7oz.

I’ve been making weak drinks this whole time! (Well, admittedly, I often purposely make weaker-than-bar drinks because I often find myself looking for liquid refreshment more than I’m looking to get toasted.) 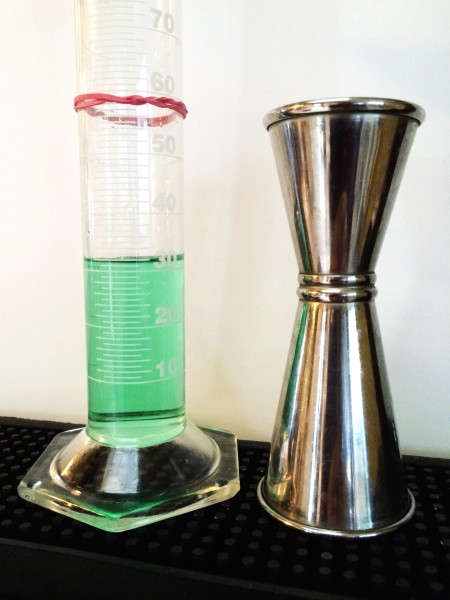 2 thoughts on “On accurately measuring 2oz”