I started shaving, way back in the day, with an electric razor, then switched to disposables in my mid twenties. Four years ago, I switched to a safety razor. (See: My personal devolution in shaving) It was the popular hipster thing to do at the time. The razor was, maybe $40, but the blades were pennies. 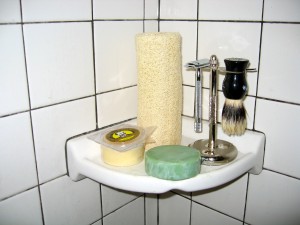 Using shaving soap with a brush is far superior to foam from a can. The razor itself? The shave wasn’t as good at first, but I thought I would get more skilled at it over time. I did get better, but not really enough to match the multi-blade disposable. Cheeks and neck, no problem. Chin and under the nose, it either didn’t get close enough or would get too close (blood!).

A few weeks ago, I picked up a Quattro razor as an experiment — my razor of choice back when I used disposables. I find that the multiple flexible blades give a remarkably close shave, even in the problem areas. But because I shave only a couple of times a week and because my scruff doesn’t grow long, but thick, it clogs like crazy. 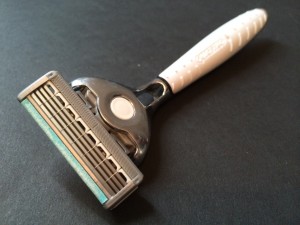 Based on this experiment, I think I have a new routine: a first rough pass with the Merkur safety razor to get the majority of the scruff followed by a second detail pass with the Quattro. I like the old-timey and money-saving aspect of the safety razor, but I think I’ve finally learned that it just doesn’t *ahem* cut it for me as my one-and-only razor.

One thought on “A close shave”