Yes, I indeed made that Spam-n-Lima recipe.

A couple of weeks ago, a Buzzfeed article of upsetting vintage recipes floated around the internet. A lot of them looked genuinely bad. A lot of them used some definition of “salad” of which I was previously unaware. But one of them stuck out to me: 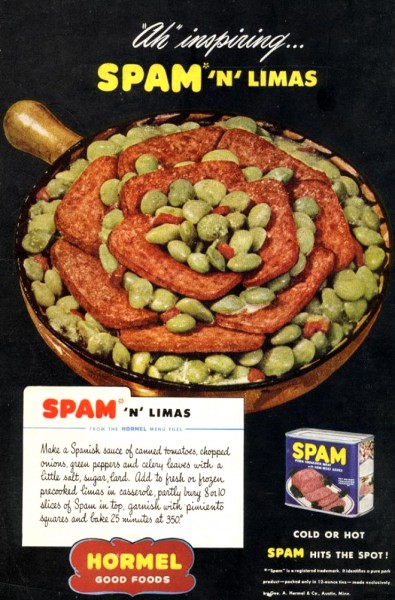 How bad could it be? I set out to discover. Full disclosure: I like spam. I like lima beans. 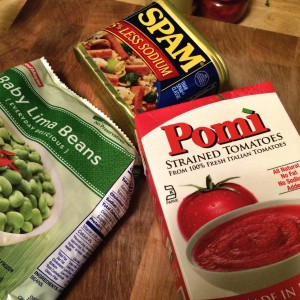 I picked a night when my wife was out of town, well, technically, returning to town. My plan was to treat Spam-n-Limas as a “decoy dinner.” It was a dinner I would post to Instagram and Facebook, to subtly alert her to a potentially horrible dinner. No worries — at the same time, I secretly made a tasty dish of chicken penne alfredo as our real dinner. To surprise her, I specifically avoided any mention of this “real” dinner.

The first problem with this vintage quote-unquote-recipe is that it listed neither quantities nor ratios. I sort of had to wing it. 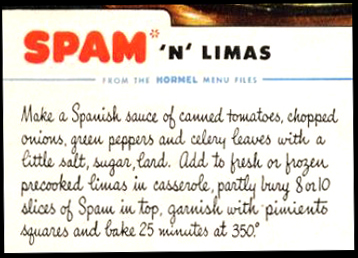 The second problem was lard. I wasn’t about to buy a big tub of lard that I’d use exactly once for a novelty recipe. Lard is pretty gross (says the man who likes both Spam and lima beans). My quantities looked a little something like this:

It all came together adequately, I guess. I followed the flow of the recipe, but I probably should have sautéed the onions and peppers, then thrown the tomato in on top of them. Most recipes work that way, but I blindly followed this one in its ingredient order without thinking, until it was too late to switch the order. In the end, I pulled this beast from the oven:

One huge difference: you can’t really see any of the tomato “Spanish sauce” in the original recipe’s image. Should I have used less? If so, it would have been a dry mess. Cooked-then-baked, lima beans without any sort of liquid turn into rocks, as evidenced by a few of the topmost beans here.

I didn’t find it horrible, but I also didn’t find a reason to ever make it again. Maybe lard would have improved it? Or not. No idea. The sauce tasted really out of place from the other ingredients. It’s also not really visible in the picture-ad-recipe, leaving me wondering if the picture and attached recipe really are the same thing.

Honestly, if I were to make this again, I’d fry the Spam and serve the limas as a side dish, totally skipping the sauce.

One thought on “Yep, I made those Spam-n-Limas”