It’s the end of one year, the beginning of another, the time of Christmas cards and family newsletters. I haven’t typically been into either of those, but this has been a special year — in both good and bad ways. If, somehow, you arrived at a print copy of this blog post, you can find a better copy online, with clickable links and zoomable images, by going to http://nja.me/2013 in your web browser.

The biggest news, which is also the worst news, is that our little guy, Ebenezer, passed away the weekend before Christmas. That has put a damper on the holiday spirit. 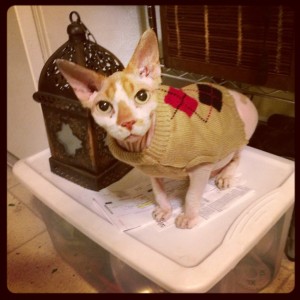 On a more positive note, the end of the year marks 6 years of Kim and I in this now-105 year old house. We got it in November 2007 and moved in in December. There are constant small projects and repairs, and there have been a few big repairs.

We occasionally have a few mice around the property, likely due to the compost pile at the back of the yard. Sometimes one ventures into the house. They rarely venture indoors, but I’m reminded of the time I left a loaf of bread on the counter overnight. The next morning, there was a very cartoonish mousehole burrowed from the back of the bread to the front. Whether indoors or outdoors, Norman (our indoor/outdoor tuxedo cat) does a pretty good job of finding them. This year, we had a brief encounter with attic rats. Cats couldn’t really help with that situation. Fortunately, I managed to design and print some really nice looking vent covers over the ingress points. I used traps to get the ones that were already indoors, then attempted to convert the leftover traps into toy cars (with very little success).

I’ve fixed cabinet doors, replaced the garbage disposal, pulled out an old dishwasher (though I let professionals install the new one), put a lot of work into the garden, and countless other things I’m probably forgetting. I’ve learned pickling (of our home-grown cucumbers) and dabbled in cheesemaking.

As I write this, Kim is in the other room, rearranging the cabinet contents and replacing the lesser-used spice rack jars (cajun powder? really?) with more rare but more commonly (in this household) used ones such as berberé and smoked paprika. 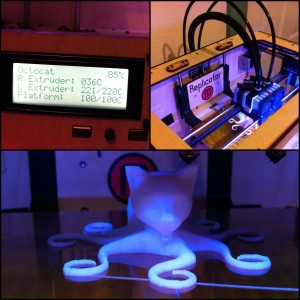 On the more technical front, as many folks know, I got a MakerBot 3D printer a few years back. A lot of what I do with it is downloading and printing models that other folks have shared, such as an iPhone stand, ghost figures, or a dog skull. But I also design and share some of my own models. Although the Octocat from July 2011 continues to be my top-downloaded model, I’ve gotten better at 3D modeling and have released a dozen new designs into the world over the past year. Also, I’ve made improvements in small-format studio photography, so that I can better portray those models to the world. It turns out that there’s a huge difference between an unedited cellphone-camera picture and one with a proper backdrop, lighting, and a bit of photo-retouching.

This past year, I published an average of one 3D model per month. About twice that never made it beyond prototyping or were otherwise unworthy of publishing. It wasn’t an even one model per month. The publishing cycle saw some months with several releases and other months with none. Here is a visual summary of those models in no particular order:

I’ve written another year of puzzles for Puzzled Pint. In case you don’t know, Puzzled Pint is a monthly puzzle-solving event here in Portland, but also simulcast out to Seattle and London. (Think logic and word puzzles, not jigsaw.) It is held at a new location every month. The night before, we post a puzzle online that solves to a bar name. The night of the event itself, we distribute packets of 4-6 puzzles each that folks can ponder over, with a pint or cocktail in hand. It’s a fun, intellectual monthly social hour.

I also designed a puzzle box as part of a puzzle hunt that the local community threw specifically for an audience of one: Curtis, one of the founding members of the local puzzle scene.

On the work front, I’ve been at Elemental for a little over three years. Since Portland’s city growth tends to pack inward versus sprawl outward, my commute is a quick 20-30 minute bus ride. I average about 5.5 hrs of walking per day (28,000 steps). I don’t have perfect driving data for the calendar year, but I can say that between July 2012, when gas was $3.79, and July 2013 (when I next bought gasoline, a year later, at $4.09), I drove 115 miles. Most of that was fun summertime top-down driving in the warm sun.

This year, Elemental flew me to the C++Now conference in beautiful Aspen. I have a patent application submitted, related to closed captioning. It took a bit of back-and-forth with the lawyers. It’s entirely in the USPTO’s hands now. My understanding is that we’ll hear back from them in about three years, regardless of whether it’s approved or declined. If declined, it may take another couple of years of rework. Government efficiency at its best.

Kim’s business and full-time passion, Sakkara Clothing & Costume, is doing well. 2013 was a great year. She’s looking forward to the next year, full of travel and designing new collections.

Her vending schedule gives us several mini-vacations each year. They’re not full-blown vacations because she always has to work a couple of days, but we always take some extra days to visit friends, go to museums, explore the city we’re in, and to just have fun.

Although I’ve slowly built up confidence in the kitchen, Kim remains the more experienced and versatile between us. Occasionally, we have “make something from nothing” nights, where we raid the back of the cabinets to make delicious food from what is available, like a challenge. We have a running joke about those nights. She keeps adding ingredients until it’s good. When I try the same, every ingredient I add makes “something from nothing” worse. She can invent recipes on the fly. I require practicing a baseline recipe a few times before I’m comfortable improvising variations. Me, make up a recipe from scratch? Forget about it.