Recently, I had the pleasure of building a puzzle-hunt gadget. The circumstances surrounding this particular device and hunt were extremely unique. The puzzle hunt was for an audience of one — a surprise birthday party for my friend Curtis. The gadget was one stage in an afternoon game. The device itself is a screen and keypad embedded in a sleek laser-cut enclosure. Once solved, an integrated thermal printer spits out an important message that furthers the plot and adventure, leading to the next phase of the puzzle hunt. 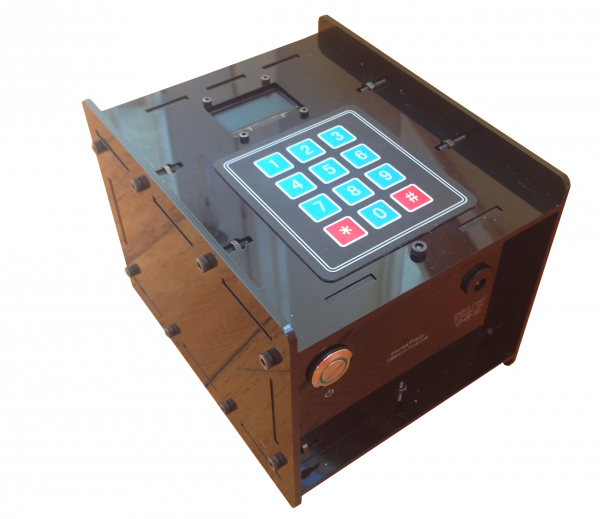 My initial pencil-sketches of the gadget got tagged with the name “Chubby Tricorder,” mainly due to the thickness required by the thermal printer. It’s a terrible name, especially given that we later introduced an actual tricorder. But it’s a memorable name. So while my narrative will describe it as a puzzle box, a gadget, a black box, and so forth, do not be confused if you see the phrase “Chubby Tricorder” when digging deeper into the engineering files.

But I get ahead of myself. This first blog post is the lead-up to the gadget. It is the first in a series of three. I assume you’ll hear about the overall adventure in the coming days, from Curtis and from the people more centrally-involved in game control. I first heard about this game about two months ago when Richard approached the Puzzled Pint organizers at a planning meeting (from which Curtis was absent, of course). Curtis and DeeAnn have put so much time and effort into the local puzzle community that Richard wanted to give back. On our Puzzled Pint planning mailing list, the puzzle hunt that Neil Patrick Harris’ fiancée threw for him made the rounds. A few of us joked that we had birthdays coming up. In this case, Curtis’ 40th was approaching. No joke. There would now be a puzzle hunt for him.

I couldn’t take an active role in building the game. I have too many commitments already between work, puzzle-based projects, yoga, my family, and my own “maker” projects with 3D printing and laser cutting. I really wanted to say yes but knew that doing so would end up with me dropping the ball somewhere and letting someone down. So I stayed on the fringe, but offered to build a puzzle or playtest and, of course, to help out on event day.

A little over a month ago, Matt approached me about building a puzzle. They needed a physical object of some sort, something that could contain some paper. I did a little bit of thinking and came up with a few possible ideas.

CRYPTEX • I could print (or have professionally printed) a cryptex. There is a pretty decent cryptex model on Thingiverse. That version uses glued-on paper strips for the letters (and to customize the answer to your own word), which seemed a bit lame. Getting it printed at Shapeways meant having a great resolution for embossing letters, so I could tweak the model by putting the letters in the right place in the source file for each wheel. I could also replace them with geometric shapes, Klingon, Romulan, or whatever. The downside here is that a cryptex feels extremely out of place for far-future SciFi like Star Trek.

HANDHELD COMPUTER • Another thought was to build a small screen and keypad. It had the downside of not “containing” a message, as in a piece of paper, but could convey one on a screen.

REVERSE GEOCACHE-LIKE DEVICE • Another idea was to build a lockbox that had the screen and keypad, but that also had a locking mechanism. Like a reverse-geocache, it could unlock itself – though in this case it would be based on an answer, not on a GPS position. This did not feel like the right answer to me. You could achieve the same result by buying an electronic safe. I had no real experience in manufacturing a reverse geocache and didn’t want to risk a crash-course of trial and error. I had about a month. I trust Curtis to not smash the device, but it still felt conceptually wrong to use something that could just be piñataed open.

PRINTER DEVICE • I had actually wanted to work with a thermal printer for a while and wondered if I could combine some of the above ideas into a hybrid. Start with the box that has a screen and keypad holding a piece of paper, but turn the idea around. Instead of holding the paper message, it would manufacture it on demand.

I liked the printer idea the best, as far as the fun and challenge of building the project and the minimal risk in implementing it. Wrap it in a laser cut and etched black acrylic case, and you have something out of Star Trek (admittedly, leaning a little more Original-Series-Trek, but trek nonetheless). I pinged Matt and Richard and they loved the idea. I specifically did not commit to making the puzzle that yields the unlock combination. I thought I would have enough work on my hands in building the box that I could not also focus on designing, testing, and revising the corresponding puzzle. They assured me that that would be taken care of.

So I had just over a month to make it happen. Just like Puzzled Pint. Except I had to manufacture a piece of high-tech electronics.

Next up is Part 2: the design.