Yesterday I asked about Iron Man comics and stated that I like the new Hawkeye, but that I had previously never gotten into “superhero” style comics. So which comics do I like? 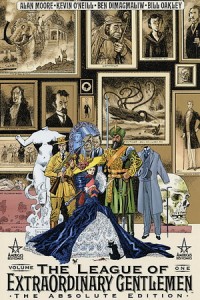 The thing that started it all was The League of Extraordinary Gentlemen movie on the horizon. It looked like a great mix of Victorian science fiction (a.k.a. “steampunk”) and alternate-history, weaving together the stories of a handful of fictional characters of the era. I thought it would good to give it a shot; to be familiar with the source material before viewing the film. I bought it. I read it. I really enjoyed the book. In fact, each page is packed so full of inside references that I found and bookmarked a companion website that went page-by-page through the book and highlighted all the references. Sadly, it was a Geocities site that is long gone, but Notes on League of Extraordinary Gentlemen #1 seems roughly equivalent. The movie? I know that a lot of people hated that film, but I actually enjoyed it. 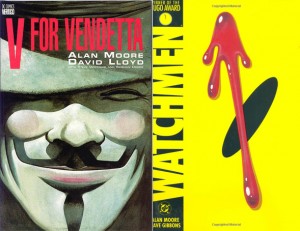 Lather, rinse, repeat for V for Vendetta and The Watchmen. Although I had never been into comics, myself, I have always been surrounded by friends who are into them, some more than others. I’d heard friends talk about how cool both were since way back in high school. Based on the book/movie differences in Gentlemen, I decided I had to read these two before the movies.

So my comic book initiation was via movies, and exclusively Alan Moore. Oddly enough, I saw From Hell without first reading the comic. I should probably put that on my reading list. 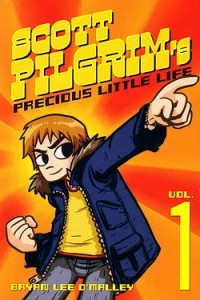 Next up was another movie: Scott Pilgrim vs. The World. It took me a while to get into the style of the comic and to identify certain characters because many were styled similarly, but I really liked it by the end. When it came out, I really enjoyed the video-game-ness of the movie. 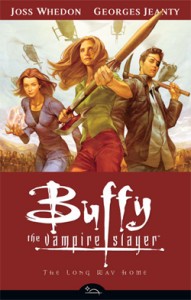 Now, the Buffy the Vampire Slayer comics? I couldn’t get into them. The comics start off after the final television season, but I only got a few issues in before I lost interest. 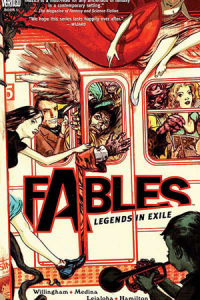 I picked up the first two issues of the Fables series and enjoyed what was there, but I guess not enough to go back and pick up more? That’s about as far as I got.

More recently, I heard about Locke & Key from The Incomparable podcast. To quote the Amazon description: “Locke & Key tells of Keyhouse, an unlikely New England mansion, with fantastic doors that transform all who dare to walk through them, and home to a hate-filled and relentless creature that will not rest until it forces open the most terrible door of them all!”

Locke & Key is a story about modern-day characters, but it’s also about a special house and magic keys that were both passed down generation after generation since the Civil War days. You end up with amazing flashbacks to not just the parents of the kids who know occupy the house, but to other eras, all the way back to when the keys were first made. This also affords the authors to write some side-stories with totally different characters, but a familiar setting with familiar (as well as new) keys. 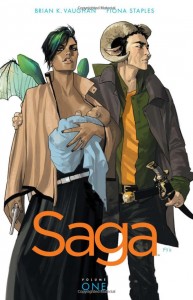 I was fully ready to not like Saga. After hearing Merlin Mann talk about it for months on his various podcasts, I wasn’t sure it was for me. And I was getting tired of hearing how awesome he thought it was. But a few weeks ago, The Incomparable did a full show on it, which left me intrigued enough to look at the first issue of the first volume digitally. And, you know what? It really was pretty awesome.

I’ve heard Saga described as Star Wars meets Game of Thrones. It is compared to Romeo & Juliet and Lord of the Rings. Those are sort of right, and it does have enough sex and boobies to qualify for the Game of Thrones comparison, but it’s really just its own thing. There are two warring races in the galaxy. The ones with wings have mastered technology, the ones with horns have mastered magic. The winged lady is a prison guard, the horned man is a prisoner of war. They flee together and have a child (something that was previously thought impossible between their races). Some bounty hunters — The Will and his companion Lying Cat and The Stalk, who is a freaky crab/spider woman — are hired to go after them as well as Price Robot IV. 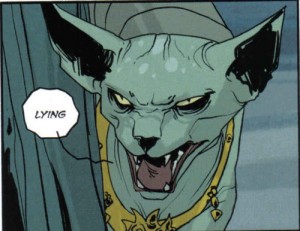 The series isn’t over yet. There are two trade-paperback volumes out and a single issue beyond the second volume. This is one where I bought the paperbacks and, instead of waiting for the next paperback like I usually do, I went ahead and bought the next issue digitally. 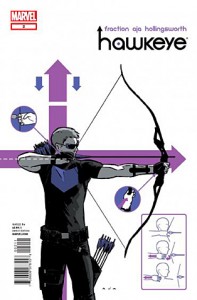 And finally, Hawkeye. I talked about it yesterday when asking about Iron Man.  This is the first “superhero” comic I got into. This is due, in part, to Merlin Mann ranting about it.

So, gentle reader: Which comics do you like? Which ones do you think I would enjoy?