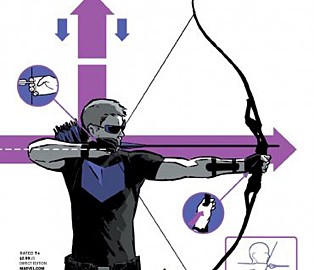 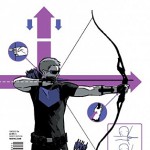 I don’t really consider myself a comic book person, but I do have occasional stretches where I will get into comics for a few weeks before dropping back out of them for months. Recently, I picked up a copy of the new Hawkeye series by Matt Fraction. In fact, I picked up the first issue on Comixology to try it out and had finished the series a day later.

As you may or may not know from The Avengers movie, Hawkeye was the guy with no superpowers — no super-healing, no super-speed, no super-strength — just a paleolithic stick and string. This series covers his life when he’s not being an Avenger. He’s not saving the world in epic ways, but he is helping people and doing good in smaller, more everyday ways. And occasionally calls Tony Stark over to help him set up his Tivo.

This got me thinking about the other Avengers. I really like Iron Man in the various movies he’s in and thought I might try out a comic. I see that Comixology has a lot of Iron Man and I am sure there is even more out there that isn’t in the app. In fact, there is so much of it that I have no idea where to even begin. Most of the comics I read are contained story arcs with a specific starting issue. The superhero stuff spans decades — generations, sometimes. Where do you even begin. So I asked the Lazyweb. 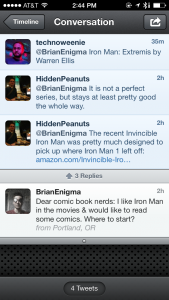 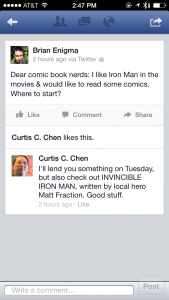 Thanks to @HiddenPeanuts, @technoweenie, and @CurtisCChen, I will take a look at Invincible Iron Man first (bonus: by Matt Fraction, whom I am already familiar with due to Hawkeye), followed by Iron Man: Extremis.

One thought on “Your Iron Man Responses”