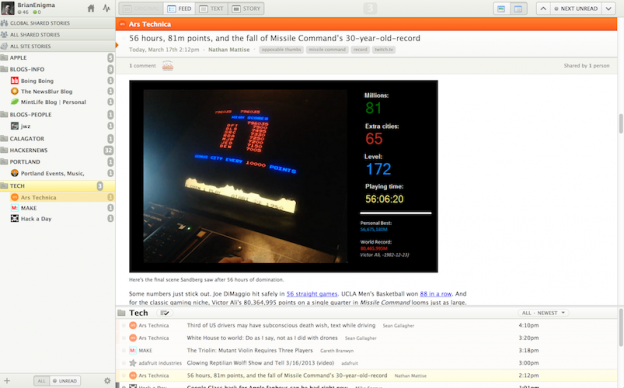 As you might have heard, Google announced that they will be pulling the plug on Google Reader.  Google Reader is the system that lets you hook up to the news feeds of virtually any blog or website.  If a site updates frequently, it’ll cache all of those updates and let you read them in a consistent interface.  If a site updates infrequently, its updates also appear in the unified interface, meaning you don’t have to remember to keep checking back each week to see if they posted something new.

Google’s stated reasoning for pulling the plug goes a little something like this: “We know Reader has a devoted following who will be very sad to see it go. We’re sad too.  There are two simple reasons for this: usage of Google Reader has declined, and as a company we’re pouring all of our energy into fewer products.”  …like a computer strapped to your face and a cellphone operating system they give away for free.  I wonder how the usage numbers of Google Reader compare to those of Google+?

I consider myself a Google Reader power user.  Overall, I have about 250 website feeds subscribed.  Realistically, though, many of those are for old or dead sites that do not update anymore (such as the blogs used for story exposition in Alternate Reality Games), and I’m subscribed to more like 50-100 active blogs.  I use entirely keyboard shortcuts to navigate.  I do a lot of skimming and push stuff off to Instapaper if a given article looks interesting and time-consuming.

I decided to do a survey of a few of the more popular alternatives to Google Reader.  The following conclusions are based on my own opinions about what works best for me.  Your situation and needs may differ.  Your mileage may vary.  I also must admit to preferring “freemium” services.  I understand that business model.  I understand that I’m either a customer paying for the service or a freeloading customer getting a smaller subset of features, subsidized by paying customers.  These sorts of businesses have a much better chance of surviving than the ones that treat the “customers” as product to advertisers — or worse, ones that amass customers and hope to be acquired by a larger company before their funding dries up.  I will gladly pay for the freemium services that I get a lot of usage from: Dropbox, Pandora, Rdio, and so on.

NewsBlur has apparently been around for a few years, but is just now receiving a lot of attention.  It’s not a 100% clone of Google Reader.  The guy who wrote it didn’t like a number of things about Reader, so wrote his own.  The interface is opinionated, but well-reasoned, justified, and consistent (whether or not you agree with the opinions).  For me, the largest shock was the 3-pane interface.  It bugged me at first, but I’ve grown to appreciate being able to both skim titles and fly through content.  It’s not a design decision I would have made up front, but I appreciate it now that I’ve played with it.

The keyboard commands are mostly the same, but a little different.  The biggest difference is probably up/down going to the previous/next article rather than scrolling one line in the current article.  There’s no way to scroll one line.  Space and Shift-Space scroll the article a half-page.  It was jarring at first, but feels intuitive now, and a half-page scroll feels like just the right amount, especially because it smooth-scrolls, giving your eyes something to track on.  Opening the original webpage is “o” for Open instead of “v” for View.  That keeps tripping me up, and I’m thankful that there’s no function mapped to “v” that I’m accidentally triggering.

The position of the mouse in the main feed view altering your position in the title view, and consequently marking things as read is kind of annoying.  Especially if you’ve been using hotkeys, so your OS things you are typing and conveniently hides the mouse cursor.  “Why did ‘j’ jump me down two stories instead of one?  Oh, the mouse toward the bottom of the story window and these are short entries.”  I have to remember to move the mouse out of the story pane.

The overall UI is extremely well designed.  It feels like some real UI/UX work went into it.  This is in strong contrast to the rest of the news reader offerings, especially Fever.  I like that articles from individual sites are color coded.  This is especially helpful when looking at a folder of multiple feeds.  The coloring system even gets carried over to the iPhone client.  For example, I have a “Portland” folder that contains feeds for the Portland Reddit community, the two free weekly papers, the neighborhood association website, and a low-traffic site called Vintage Portland that features old pictures of the city.  The colors let me skim through the high-volume/high-noise stuff in Reddit and the weeklies, but also quickly identify the neighborhood and vintage blog posts.

The guy behind it is very active on Twitter (@NewsBlur and @SamuelClay) and provides good, timely updates on status and downtime.

The social pieces — commenting and sharing — look promising, but I haven’t actively dug into them yet. Friend me at http://brianenigma.newsblur.com/.  Sharing out to Instapaper looks like it’s a mouse-only move, with no keyboard equivalent (as I could do with the Shift-T “send To…” in Google Reader).  Nor have I tried the Intelligence Trainer feature yet.

The source code for NewsBlur is on Github. If I wanted to configure and run my own instance of NewsBlur, I suppose I could. But I don’t think I would, due to all of the required infrastructure.  If you use the official NewsBlur servers, you have a choice between a free or paid account.  The free account gives you up to 64 news feeds.  The full account — costing $12, $24, or $36 per year, depending on how much you’d like to donate — gives you unlimited feeds and a handful of additional features.  That being said, at the time of writing, free accounts are temporarily disabled and the $12 tier is similar disabled to help reduce server load while they bring up new servers and speed up the code, though there are apparently ways around these restrictions, if you’re resourceful.

One of the huge things going for Fever is that my current iPhone/iPad news reading client, Reeder, can sync to it.  Since a little over half of my RSS reading is on the bus, this means less disruption in my news reading workflow.

I like the “Hot” feature that looks for links that multiple sources point to, aggregating them into a summary of what’s important at the moment.  The business model (a $30 one-time fee) seems sound.

But I really dislike the UI.  The keyboard navigation didn’t quite work correctly for me, with articles jumping around weirdly.  The overall black and white interface seems quite plain.  The three-column interface didn’t seem well thought out.

The fact that it’s self-hosted is simultaneously kind of cool and also makes it virtually impossible to recommend to friends.  You need your own hosting, complete with PHP and MySQL.  Geeks have this (or can obtain it easily).  Non-geeks don’t have the motivation to set that up.  I can say that the method to verify before paying is kind of cool.  You download and install a stub app on your server.  It verifies your setup and environment, then provides you with a code.  You use that code when purchasing, to verify that you really can run the app.  You can’t accidentally buy the app without first proving you can run it.  Once purchased, the stub automatically downloads and installs the full application.  The app can also auto-update itself.  One thing I’ve really grown to enjoy about self-hosted WordPress installations is that they’re a one-click upgrade.  Downloading an archive, pushing it to your server, unpacking it, then running upgrade scripts doesn’t seem like it should be a lot of work, but when compared to a one-click upgrade, it’s a lot of friction in the upgrade process.  (And before the one-click, I would sometimes go for weeks before sitting down to finally upgrade my blog.)

The theory behind The Old Reader is that they started with the previous version of Google Reader, from before Google stripped away the sharing features.  They’ve been building it up from there.  I glanced through The Old Reader, but decided to skip it.  There’s no mobile app.  Do they have a business model? I couldn’t find one. Who’s paying the hosting bills? Will they be around in 6 months, or will I have to again look for another news reader?

Most importantly: you have to use a Facebook or Google account to sign up.  What?  I thought we were trying to get away from Google.  While I will sometimes hand over my Facebook account to some apps to perform an optional “find my friends” maneuver, I flat-out refuse to sign up for a service that hinges its entire sign-up and login mechanism upon Facebook’s whims.  (I’m looking at you, Spotify.)

I hate the UI of each of these for news reading.  Flipboard is wonderful for skimming Twitter or Facebook, but when it comes to a news reader, I want to use something resembling a news reader.  I don’t want it to emulate a glossy magazine.

Originally, I did not like the interface, but discovered you can switch it to a more traditional list view versus the default “magazine” view.

When using Feedly, I’m a little unsure what I’m interacting with. I had to install a Chrome app. Is Feedly a website? An app? Where does the data live? What does the iOS client sync to? Based on a blog post it appears that they’re just a front-end for Google Reader and that they’ll switch to their own sync engine Real Soon Now. I wish them luck in this endeavor, but I have my doubts that it’s going to “just work” at that scale without a lot of growing pains. The other players in this market already have sync-and-fetch back-ends in place and have already experienced the initial growing pains and the mass-exodus scaling pains earlier this week.

Also, unless I missed something, I was required to sign up with my Google account. Again, I thought we were trying to move away from Google?  I assume this will change when they migrate to their own syncing back end.

The lack of a stated business model similarly scares me.

Maybe I’ll check back on Feedly in July, after Google shuts things down.

If you couldn’t tell already, I’ve switched to NewsBlur.  Due to the server load issues of everybody switching away from Google Reader at once, it wasn’t an instant cut-over switch.  In the last few days, though, I have been getting my news entirely from the NewsBlur iPhone and iPad app as well as via its web interface.  My always-open Google Reader browser tab was replaced a couple of days ago, and I haven’t gone back.  The Reeder icon on my i-devices home screens has been replaced by the NewsBlur app.  I’m done with Google Reader.  Even if they decide the closure announcement was an accident and reverse their decision, I don’t have a reason to go back.  NewsBlur has active feature development.  Google Reader’s only active development has been to force people over to Google+. 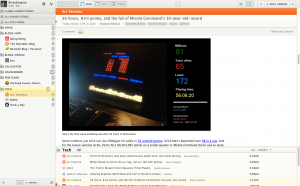