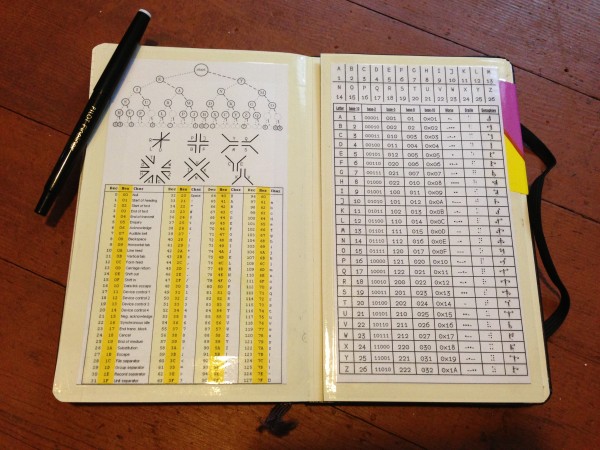 As you might know, I do a lot of puzzle solving.  While some of those puzzles are traditional book puzzles — sudoku, crosswords, word search, and so on — most are The Game-style puzzles of deducing, filtering, and sorting data.  This is then followed by translating that result to an English word or phrase.  Because of this coding layer, I tend to keep a bunch of “code sheets” handy.  I am sure you already know of the well-known encoding methods like Morse code, semaphore, and Braille.  There are also rotational and Caesar ciphers and translating letters to various number-bases (decimal, binary, ternary, octal, hex, ASCII). 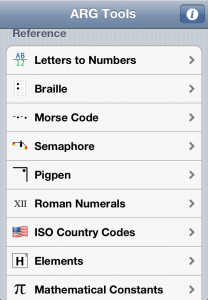 Of course, I wrote an iPhone app (ARG Tools) that keeps these references handy, but I’m frequently a paper person.  When I want to jot down a quick note, what do I do?  Power up my phone, slide-to-unlock, type in my password, hit the Home key a couple of times to get to the right home screen, launch an app, hit “+” to start a new note, bring up the keyboard, and start typing?  No!  I pull out my Field Notes and Space Pen and write it down Hipster PDA-style.  Later that note might end up in the computer, but for speed, it initially goes on paper.  I do something similar with my Moleskine notebook.  Frequently, I use that notebook for solving or designing puzzles.  For the “standard” codes, I find it easier to flip to the last page and reference something than to whip out the iPhone and go through the above process of powering, unlocking, and launching.

When I get a new Moleskine, I print out a new copy of the code sheets and paste them in the back.  They’re not as extensive as the ARG Tools app, but they work well at quickly covering the basics.  I decided to share the PDF here in case others find them useful.  They’re meant for the 5″ x 8.25″ notebooks.  One goes on the pocket flap and the other goes on the facing thick coverpage.  I typically use a glue stick, then tape down the edges to prevent peeling.

One thought on “Moleskine code sheet”