Glow sticks plus construction paper plus a dark setting:

Recently I saw a couple of crafty articles flow across my RSS newsreader that involved making creepy glowing halloween eyes by using glow sticks and empty toilet paper tubes. I thought it was a cool idea, but saw three fundamental flaws in those designs. 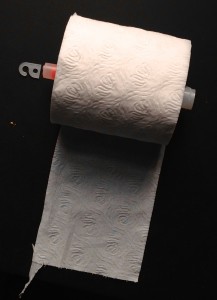 2. I am not a Martha Stewart worshipping hoarder.  I do not hang on to old toilet paper tubes, yogurt cups, styrafoam meat packing trays, or anything else generally regarded as recyclable or disposable packaging.  I try to buy local things, with the least amount of packaging, carry it home in my own reusable cloth bags, and put what’s left in the appropriate curbside container.

Given this, I decided to draft up a quick alternative design that can be made from construction paper.  (For some reason I have a lot of black construction paper on hand.)  I made mine a square tube rather than cylindrical.  I figured that gives it a better chance of not rolling off of a shelf.

First, I sketched out a papercraft box.  This one was designed for minimal light seepage — the two ends have nice long flaps and there is an extra overlapping body segment to stop light from leaking out the back.

Next, I measured a glow stick and attached measurements to the box. 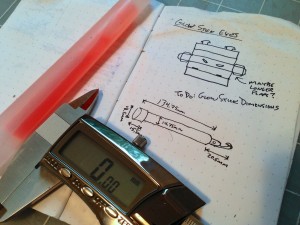 I then plotted that design in the computer, printed a template, used that template to cut construction paper, and built a prototype.  I actually went through two prototypes because I decided that I did not like the design of the side flaps.  I changed them from square to tapered because they were a little difficult to insert.

For more papercraft projects, check out the Netninja.com papercraft tag.