When this post goes live, the new 1.5 version of my ARG Tools iPhone app should also be live.  What is ARG Tools, you ask?  It is a collection of tools and reference material for people who routinely solve puzzles: alternate reality games (ARGs), puzzle trails, The Game, and whatnot.

The app (or, rather, my interesting in maintaining it) has been dormant for quite a while.  Most recently, things like DASH, The Black Letter Game, and WarTron have sparked a newly kindled interest in refreshing it.  This new version has finally (a year and a half late) hopped on the Retina Display bandwagon and offers a few bugfixes as well as a few new features.  Notable changes include:

This version also removes a few things in an effort to simplify the interface.  The integrated browser is gone in favor of fast-app-switching to Safari.  This makes your bookmarklets and history available but, more importantly, honors the system settings for parental access control.  The list of web links has similarly been shorted to the essentials (Google, Wikipedia, and the like).

Tell your friends.  Give it stars in iTunes. 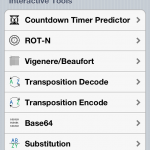 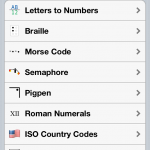 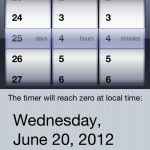 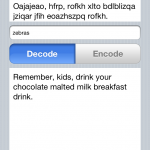 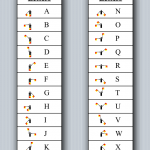 P.S. There is even a 1.6 version in the works that, so far, adds in a detailed ASCII chart, the phonetic alphabet, the glyphs from Myst, and a list of prime numbers.  Do you have thoughts on what else might be useful?  Write a comment or drop a line.

One thought on “ARG/Puzzle Tools: The Next Generation”