[Blog note: I have a more recent post about making garden tags with a laser cutter.]

I have written several recent posts about creating things FOR cats (see also: cat scratcher, printed toy ball, cut toy ball, etc.), but this is a short post based on creating something FROM the byproduct of cat ownership.

I do not know where I originally read about it, but a few years ago I ran across a project where someone used old flatware (spoons and butter knives) to mark parts of the garden by hammering embossed letters into them — and in the spoon’s case, hammering it flat first — and then sticking them in the ground.

I thought this was a cool idea and ordered some punches for stamping metal and leather.  I never actually got around to finding random bits of tableware, though I poked around Village Merchants several times over the years. 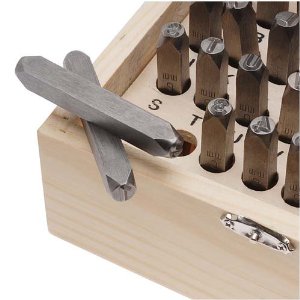 Today, I planted a bunch of seedlings in trays and needed a way to mark which seed cups were which.  Of course, it had to be waterproof so that watering did not damage the markers.  This is when the metal-punch project came back to me — except since then, I’ve obtained a pair of tin snips.  I spied a cat food can in the recycling and put two and two together.

Using the tin snips, I cut the cans into strips.  I then hammered text into them and cut them apart.  In a way, it was like a heavily manual and metallic version of the old Dymo labeler.  Unfortunately, I have no photos of the process.  It was a fairly organic experiment and I had no idea what the end result would look like, so I did not document it.

The results were certainly not perfect, but good enough to identify which parts of the trays were which.

One thought on “Cat food cans to garden tags”