It does not take much to make a cat toy.  Often times, they will make their own toys out of stuff around the house (even if you do not want them to) such as shoelaces.  They like crumpled up paper balls.  They like the plastic pull-off safety tab from the milk bottle.  They like chewing on the corners of any random piece of cardboard as well as books.  That fancy catnip mouse you bought special for them from the pet store?  They ignore it.

My cats?  They love to play soccer.  Toy balls, wadded up paper, coffee beans, hair ties, really anything small enough to kick around, lose under the stove, and attempt to fish out (sometimes successfully, usually not) are things they enjoy.

A few months back, I did a secret project for Kim’s business.  Although it involved designing, making, and assembling something, I did not blog about it.  Company secrets and all.  What I can say is that I had a bunch of leftover 3/16″ foam-core board.  Using the scrap, I thought I would try my hand at making a few cat toys.  These would be a good combination of three things:

I think I succeeded (and in fact, I hear one being kicked around in the other room right now).  The concept is simple: just two interlocking circles that slide together: 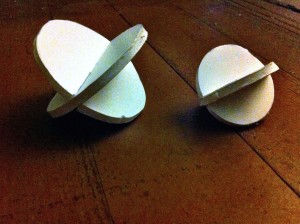 Simply print out the following pattern, cut out the circle-with-slit template, and use that as a guide for cutting foamcore with an x-acto knife.  Each toy ball requires two circles of the same size.  The template has two different size circles to try.  My cats prefer the smaller one, but yours might prefer the other. 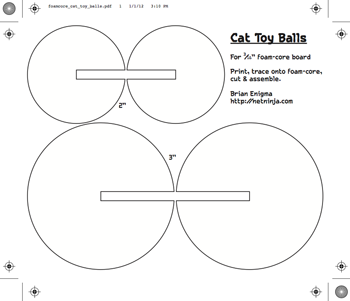 If you want to try material with a different thickness, it’s easy enough.  It’s just a circle with a slit whose width is the thickness of the material.  The thicker the material, the more rigid the resulting “sphere” will be — in other words, you’ll want foamcore or cardboard.  Cardstock or paper will be too thin.