Anyone who has been following my Instagram stream may have noticed that I have posted a number of pictures of a new MakerBot, the Replicator. I ordered one about a month ago and finally received it a little over a week ago. Unfortunately, I was sick when it arrived, so did not get around to setting it up until last weekend.

I have only been using it for a few days, but I can already tell that the Replicator is several orders of magnitude beyond what I had previously: their original Cupcake CNC.

John Dimatos, the Product Launch Manager at MakerBot Industries, sent me a personal email a few days ago, asking to “hear my story.”

“I’m completely fascinated and honored that you would buy one of the first Replicators out of the Botcave. This isn’t a customer survey — it’s an invitation from one maker to another to share. The entire team would love to hear about what you’re doing with your Replicator: why you bought it, who you’re going to use it with, and what you plan on making. So go ahead and tell me the story you want MakerBot Industries to know.”

I asked if I could respond via blog instead of email and this is my response.  It is a bit lengthy, so hang in there.

To talk about the what and why, I think we may have to rewind a few steps to my original MakerBot and maybe even decades before that.  I don’t have a simple answer like “I’m an industrial designer and I use it to prototype parts as part of my job.”

Since the beginning, I have been a software guy. I started writing code at about 8 years old and started writing software for cash at about age 16 (a multi-user chat system for dial-up BBS software). I taught myself electronics from Radio Shack kits and library books in my teens. That experience and knowledge was formalized in college. Professionally, I went into software, so never made much use of the hardware knowledge at first. Within the past decade, I have been making more and more use of my electronics know-how. In the modern era, it probably started with hacking the Dreamhost (and its cool little memory cards with screen and buttons). That progressed to a job in firmware.

Something about hardware resonates in a way that software does not. It is a physical thing, a widget. While a lot of work can go into either, at the end of the day, software is just a collection of 1s and 0s that is no more tangible than a spoken word. Hardware is something you can touch, package, and send in a cardboard box. Arguably, you can do the same with software (touch, package, ship), but only when it is carried by hardware (for example: thumb drive, CD-ROM, or network appliance).

Although I currently make my money with software, there is something I find extremely gratifying about hardware, about making and building.

When I finally decided to pick up a MakerBot Cupcake CNC, it had already been on the pages of Make Magazine and across all of the tech blogs.  I had even briefly seen one in person at a DorkbotPDX meeting. Three things about the Cupcake really stuck with me:

– The concept of building something from nothing, of turning bits and bytes into atoms.
– The comparison of the machine’s price to that of laser printers of yesteryear when they first started hitting offices. Similarly, the parallels to desktop publishing and the thought that this sort of thing will become ubiquitous in about 20 years.
– The fact that it is Open Source, upgradable, hackable, and — most importantly — understandable. All of the parts and pieces are visible, comprehensible, and documented.

In fact, that last one gave me a few surprises here and there. “Seriously? This is just a couple of power resisters with a lot of current run through them to intentionally heat them up, with the whole thing wrapped in heat-resistant tape? That’s all there is to this heater?”

After teaching myself Blender over Christmas break two years ago, I got a Cupcake CNC and was very happy with it. At times, I was envious of the newer model, the Thing-o-matic, but I stuck with the Cupcake. I used to be a latest-and-greatest-gadget guy. I had to have the latest thing when it appeared. These days, I am still somewhat of a gadget guy, but I typically skip a few generations. I’ll end up buying the latest and greatest, but only replace it when I’ve gotten as much use as possible from it. The Cupcake made this easier, since it is open and modular. I could replace just the print head and get more accurate prints.

The Cupcake never quite worked 100% for me. It worked well enough, but had a few flaws. First, the analog motor (i.e. not a stepper motor) burned some windings and had to be hacked around (see also: A couple of months with the MakerBot). Second, I could never use the heater on the automated build platform. Something about the heat caused the Z-platform to expand or the Z-rods to warp and no amount of hacking the Z-platform’s suspension nuts or their slots helped. And finally, because of #1, the extruder often spat out too much plastic, causing problems with the print head bumping up against a little mound of too much plastic, which in turn caused the X or Y belts to jump a tooth. This required a lot of babysitting the print, poking at things with tweezers or readjusting the build platform if things went bad.

I lived with it, but when the MK7 print heads came out, I decided it was time to graft in the now-discounted MK6 print head. In fact, my lovely wife ordered one for me as a Christmas gift.

The upgrade itself was maybe a little misleading. Originally I saw on the MK6 product page that you could use it on the Cupcake, but later I did not see that mentioned anymore. I followed the “Frankencable” instructions for hacking in the new stepstruder, but after I got the hardware assembled and started configuring the software, I discovered that the new 3.x firmware was no longer compatible with this hack. I then switched to the 3G 5D board (or, more specifically, the “ugly cable hack” because I wanted to do this before the end of Christmas break so did not desire to wait for a board to ship to me). The thermocouple requirement on the product page was also a little misleading (required for Thing-o-Matic, but the Cupcake requires a thermistor, instead, which I butchered my MK5 print head to obtain).

After the upgrade, things started to look like they were working better, but it turned out to never quite print right after that. The x/y table felt off, though I don’t know why. That was a piece that I did not even touch — I took out the old print head and put in the new without even moving the chassis during the upgrade. I used some twist-ties to try to hack a bit more tension into the pulleys. (I now note that the Replicator uses things like clothespin springs to achieve much the same result.) I had a few theories that I tried to prove out, but the Replicator/Skeinforge settings are numerous and the detail of their interplay is confusing.

Short prints that should have had straight verticals ended up somewhat italic. Taller prints got wiggly.  This is a cube and a cylinder: 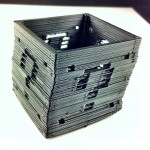 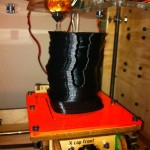 I assumed it had something to do with the plastic flow versus the x/y movement, possibly exaggerated by the fineness of the extruded plastic (which would probably require more accuracy in the table than before).  I never quite figured it out.

Now, do not come away from this story with the wrong idea. It is not meant to be a scary tale of fear and woe. I got plenty of fun and enjoyment from the Cupcake as-is. My attempt to shortcut buying a new printer by upgrading to a semi-supported-but-not-really print head did not end as well as it could have, but I learned a lot in the process about the MakerBot, about the details of printing, and about many of the Skeinforge options that I previously only glossed over — what they do, and how they interrelate. Although I was a bit frustrated at the end, the route leading there was a good path.

Time vs. money. Often times, kids have more time than money and adults have more money than time. Although I like tinkering, I got a bit frustrated with the state of my Cupcake. In the 3D printing realm, I preferred designing and making to troubleshooting and fixing. My designs themselves needed their own troubleshooting, even without troubleshooting the printer.  I wanted my focus to be the design tools and the output prints.  Every little hiccup in the printer caused more friction to that iterative design process. I thought that I got enough enjoyment out of the previous MakerBot that it would be good to start fresh with a brand new known-good, fully functional, factory-tested one rather than spend more time trying to repair the Cupcake. I think I would have still preferred a Replicator in kit form, but that is not (currently?) an option. It also helped that I came into a little bit of extra Christmas money, which helped ease the cost.

Although I ordered sight-unseen, there were a number of factors that helped simplify the order. I saw the progression in print head technology from the MK5 up to the new MK7/MK8. Each one was a pretty big step. Thanks to the magic of Open Source and freely available design files, I saw improvements to the hardware and electronics packages from the Cupcake to the Thing-o-matic (the Replicator designs were not yet released when I ordered it). It probably also did not hurt that I knew that MakerBot got a big chunk of VC funding. I saw at least two competitors arrive, but trusted MakerBot more due to its longevity and experience, not to mention my previous experience with them.

So yes, there was a small leap of faith involved in getting the new Replicator, but in the end, it felt like the right way to go. So far, given that the machine has been working flawlessly [well, see below], producing amazing prints with zero babysitting, I think I made the right decision.

The Replicator & its growing pains

When I said, above, that the Replicator was working flawlessly there are two caveats attached.

The first caveat is that one of the wires connecting a heating element to the motherboard detached from its terminal block during shipping. This was easily fixed in just a few minutes.

As for what I’m making?  All hail Octocat! 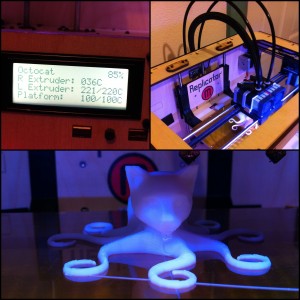 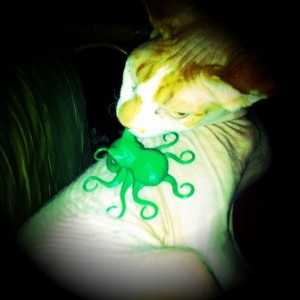 I love other-peoples’-models on Thingiverse, particularly ones that are geometric and mathematical.  I have a strong hope that within the next few years (okay, more like decade) we’ll completely replace Happy Meal toys.  And bring back our own Cracker Jack and cereal box toys.

The stuff I have been designing is fairly simplistic, though my next big thing will be an Arduino enclosure.  Previously, I have been doing that on the laser cutter (most recently, the InfoNinja).  That kind of project requires a trip to ADX and paying for time and materials.  If I can fire off a basic box on the 3D printer for projects that don’t need the niceness of the laser cutter, that saves me some time and expense.

And that, my friends, is an extremely long-winded description of why I now have a Replicator and what I intend to do with it.