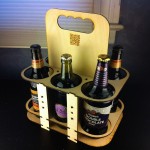 I finished my first two smallish projects at ADX Portland today.  The first was laughably simple.  The second was a pretty nice 6 pack holder.

When writing software, there is the concept of a “Hello, World” program.  And, really, that phrase right there is about the extent of the functionality of a Hello World app.  You launch it, and it responds with that exact phrase, then exits.  In the grand scheme of things, the functionality of that program is about as useless as it gets.  For programmers, especially ones using a new language, helloworld lets you ensure your tools and environment is set up correctly.  In the 3D printing world, helloworld might be a set of calibration cubes.  I am really unaware of a standardized equivalent with laser cutting.  At Ponoko, it is probably the coaster.

My first ADXPDX laser experience was my made-up equivalent of “Hello, World.”  On the MakerBot, I designed and printed a few variants of the plastic nickel.  I figured I would start with the same thing, just to get the cut lines and etch values correct.  I also threw a spinning top on there because I had the space. 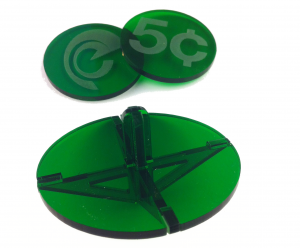 As an aside: it is worth noting that I have not actually made a wooden nickel at any point — only ABS plastic and acrylic.

It’s also worth noting that Seamus, the shopmaster, suggested uploading the top model into the CNC router.  Can you imagine a spinning top, about the size of a table?  How cool would that be?!

There were a few snags and gotchas, but it’s good that those happened on the “it’s kinda cool, but I don’t really care if it’s busted” designs.

Next up was the “real” project.  I was a little more nervous about this because I only had exactly enough material, unlike the green acrylic.  This second project was the 6 Packer by Thingiverse member timogiles.  I started with his OpenSCAD file and tweaked the parameters to fit my material (in this case, 1/8″ hobbyist plywood).  The OpenSCAD output is a bunch of parts, separated by vast margins of space.  This is kind of inefficient when it comes to cutting, where cut times are priced by the minute.  What you really want to do is pack the pieces together so that adjoining parts share as many cut lines as possible.  This is part art and part science.  I managed to (just barely) squeeze everything into two 24″x12″ sheets.  I posted my final files at Thingiverse.

Overall, I am happy with the result.  A few of the tab/slot connections had a bit more slop space than I am used to, but that was not an issue due to how tightly the screws hold everything together.  If and when I do this again, there are a couple of things I would alter:

Despite my issues, I think this is a great design that turned out well.  I owe thanks to timogiles for the original design and Jenya and Anna at ADX Portland for their help and patience with the printing.

One thought on “A robot laser helps me carry craft brew”