2011 was the year of 3D.  No, not movies, silly glasses, and headaches.  It was the year of MakerBot, Blender, OpenSCAD, and Thingiverse.  In fact, it was the year I had to convert the term “makerbot” from a tag to a full-fledged category here on the blog.  3D printing was a central concept, but orbiting it were the concepts of design, mechanical engineering, and materials engineering.

2011 was also a year of reading.  The 2011 commute leaves more time for reading and podcasts than the previous commute.  I tried to mix it up 50/50 between fiction and non-fiction; I love to learn, but sometimes I just need a good story.  The publishing landscape is changing in much the same way the music landscape did a few years back — well, maybe slightly differently due to lessons learned.  We’re seeing more people publish directly to the Kindle.  I find this exciting!

The last quarter of 2011, I started to get more into hobbyist electrical engineering focused around microprocessors.  I’ve always had the professional skill, but haven’t always felt like taking the time to also pursue this as a hobby.  Typically, there is a lot of design and redesign.  You either send off for custom boards (with long spaces of time between iterations/bugfixes) or you do it yourself with tedious techniques like wire-wrapping, point-to-point soldering, or messy techniques involving dangerous chemical solvents.  There is a lot of time spent in board bring-up.  Each microprocessor tends to have different quirks and dialects when it comes down to writing firmware.  Many have compilers that work best (or only work at all) on things like Windows 2000.  I have dabbled in the Arduino before, but 2011 felt like the year that it really started to hit critical mass.  It is a pre-made board that has a slick development environment and, most importantly, is fairly cheap ($30).  It is also modular.  Much like Legos, you can snap on bits and pieces to give you added functionality — Ethernet, WiFi, audio, video, GPS, RFID, and so on.  The only “real” project I made was the Halloween/Christmas porch lights, though I have two other projects in various states of not-yet-working and am still thinking up new ideas.

Many blogs post a year-end word cloud.  Here is my cloud for 2011.  It does a great job at reflecting the above topics.  I really like how the central theme ended up being “design something.” 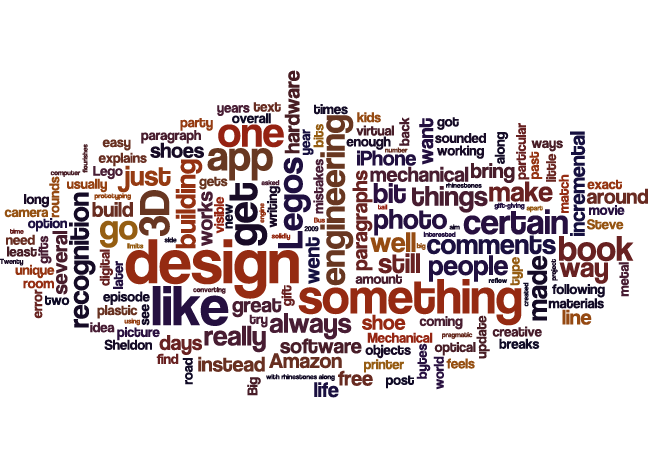 I pulled up some statistics from the past year.  They go on to prove that Netninja is neither a big nor small blog: no less than 100 visitors per day, but no more than about 400, with a total of 63K uniques.  The bounce rate and visit length can certainly stand to have some improvement. 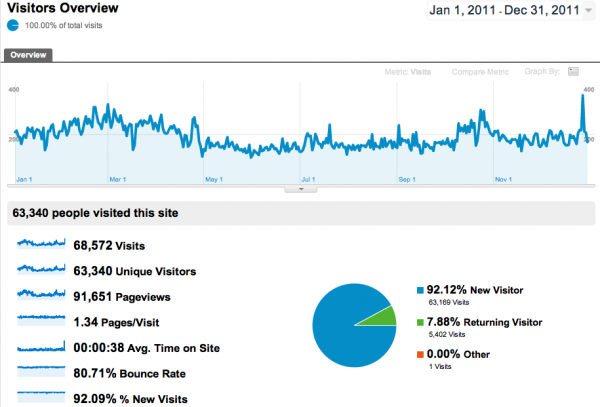 That big spike at the end of December represents all of the people who previously had a Kindle and that got a new iPad for Christmas and wanted to know how to migrate their DRM-locked content to iBooks.

Most of the incoming traffic were people searching for Kindle/iPad DRM information, inexplicably people looking for information on the Cloverfield monster (Really? That movie was so 2008!), folks looking for a Scrabble Cheat Sheet, and a variety of Hipster PDA-related stuff.

I hope that 2012 will be a good year of documenting more and more projects.  Previously to 2011 most of the projects I’ve documented here were strictly software.  That changed a bit last year, but I hope to continue the trend into electronics, 3D printing, carpentry, and anything else that could give people instructional information or inspiration.