Portland has some lax rules that allow all these wonderful food carts.  It also has some strict rules about food handling.  Legally, you cannot bring your own container.  If your container has cooties and the serving spoon touches your container, then goes back into the vat, potentially the whole batch could get cooties.  And ask any 8-year-old: cooties can be deadly.  Now, I know a few people who bring their own containers anyway and the food carts usually oblige but, much like ripping off the mattress tag, that’s technically illegal.  Enter GoBox.

GoBox is a service that provides reusable containers to food carts.  If you are a GoBox member, you can get your food in one of these containers.  When you’re done, you bring it to a drop-off point.  It gets whisked away where it is properly sterilized for reuse.  After dropping off a container, you receive a token that you present at a participating cart to get food in a new container.  The containers that that food gets served into are never touched by customer hands until handed to the customer.  They come come from a source that can legally guarantee that they are properly clean.

I recently signed up for GoBox and thought I’d share a few impressions.  First off, the boxes are great.  They are clamshell and made of thick plastic, so are strong.  They are high quality and have a good latch with a solid click so you know the thing is shut.  Every one that I have seen has been the same basic style — compartmentalized, one large, two small — with a few minor variations in design (probably bought in different batches from different suppliers).  One particular variation is just a touch more “sharp” on the three edges where the top and bottom clamshell come together.  I’m not saying it’s accidentally-cut-yourself sharp, it just bites into the hand a bit more than some of the other variants they offer.  It’s a minor annoyance, but amplified slightly if you have a few blocks to walk and a few flights of stairs to climb. 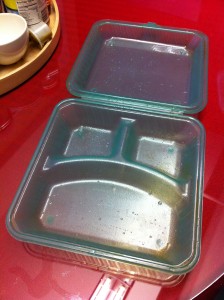 When you are done, you give it a quick scrub.  They will do the official cleaning later, but you at least want to get any obvious leftover crumbs or sauces out.  You then take it down to a drop-off location and receive a token to trade for a new box next time you’re at the food carts.  The token itself is plastic, about the same thickness and about ⅔ the size of a credit card, so easily fits in a wallet. 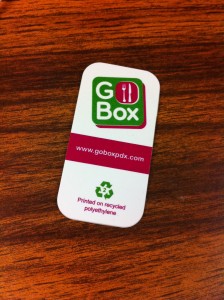 There are two main drop-off locations.  One is near the food carts on 10th, at a furniture and art store called Woonwinkel.  The other is just past the carts on 5th, the West Side Athletic Club in the base of big pink.  There have been times when I have dropped off the box and immediately used the token and other times when I hang on to the token for later.  Woonwinkel is closed on Mondays.  The Athletic Club is open until 7:30, and is just a block beyond my regular bus stop so it’s easy for me to drop off after work.

Signing up for GoBox is a one-time fee of $8.50.  Well, it’s one-time until you lose the box or token, at which point you have to sign up again.  From a consumer’s point of view, this seems reasonable.  I imagine I’d pay about the same for a reusable Tupperware-like box.  The signup process was a little awkward.  I had to fill out a card, pay for just my meal, then pay for the box separately.  This also caused the lunch-rush line to back up.  I understand that you can capture impulse buyers directly at the cart, but it almost makes more organization sense to sign people up at the drop-off locations or somehow work it so you can order online and pick up the box or token in person.  The drop-off points are convenient.  The number of participating carts was tiny when I first learned of GoBox, but has grown over the months.

I do not know their business model, but it seems like if they want it to be sustainable, the money for cleaning has to come from somewhere.  My one-time payment can potentially spawn a countless number of re-uses and re-cleanings, and that doesn’t scale.  At one point I did look into what it takes to be a drop-off point.  Although initially free, they did plan on eventually charging businesses for the privilege of being a drop-off point.  This probably pays for cleaning and transport.  I’m sure it makes sense for some businesses. A retail business as a drop-off point might get some extra foot traffic it otherwise would not have had.  For a hardware/software company on the 4th floor of an office building this makes a little less sense.  I have to imagine they also charge the carts themselves.  If the cart does not use GoBox, it has to buy containers.  If it got GoBox containers for free, I would expect all carts to start using them as a cost-savings measure.

In summary, the service (like a few of the food containers) still feels a little rough around the edges, but is still perfectly usable.  As a consumer, I feel the $8.50 is worth it and that dropping off the container, while not as convenient as throwing away a disposable object, is not inconvenient, especially for the environmental benefit.  My only complaint is that I cannot use them as much as I like.  The overlap between food carts I like going to and those participating in GoBox means I can only use it once or twice a week.  I hope GoBox does well and that they can enlist more food carts.