When I was a teen — late 80s, early 90s — the razor blade necklace was a fad.  You have probably seen them before.  You start with a ball-chain necklace and attach something that looks like (but is probably not actually) a double-edged razor blade.  Voilà!  Instant “edgy” “punk-rock” fashion accessory.  A Google Image Search will yield more concrete results if you’re still having difficulty picturing this.

I really do not know the origins of the razor blade necklace.  I’d guess we would be talking Sex Pistols era punk rock, spawning from either drug use or self-mutilation.  When I was a teen, Hot Topic hadn’t quite been founded yet, but there were a variety of local record and alterna-shops (The Electric Chair, Bionic Records, Zak-Attack) that you could walk into and purchase a hunk of metal resembling a razor blade on a metal chain, manufactured in China for some faceless corporation, ready to wear.

I find the entire concept of a fake razor blade annoying.  I mean, really, do you think you’re going to be all hard-core by wearing something that looks like a razor blade, but so obviously isn’t due to the lack of chest lacerations?  A recent promotional pack for Trent Reznor’s Girl with the Dragon Tattoo soundtrack includes a USB razor blade necklace!  (I’ll save my rant on the Holywoodized film of a Swedish film of a book for another time; though I will say that what I’ve heard of the soundtrack is great.)  This is not just a hunk of dull metal masquerading as a razor blade, this is a high-tech USB flash drive in the guise of a razor blade.  Punk rock!  Though I guess this falls in line with the same sort of marketing-thinking that brings the Lizbeth Salander line of clothing to H&M.  A recent tweet that I can no longer find the source of suggested the Lizbeth would more likely set H&M on fire than buy “punk rock” clothes from there.

In my entire life, I have never seen a razor blade necklace made with an actual razor blade.  I’m not advocating people take up the DIY ethic and build their own razor blade necklaces.  That would be a bad idea.  Even when “dull,” those suckers can be sharp.  I cut my finger slightly when removing blades from my “spent” box for the following photo. 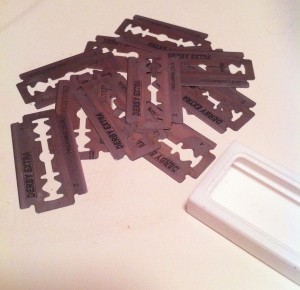 I simply feel that the whole fake razor blade thing has jumped the shark and needs to be put to sleep.  Let’s move on and find something else rather than recycling a fad from the 80s, which was in turn a recycled fad from the 70s.  Or at the very least, mutate it and make it something new.  Gluing a gear to it won’t necessarily make it steampunk, or good, but at least it would make it DIFFERENT from the original.